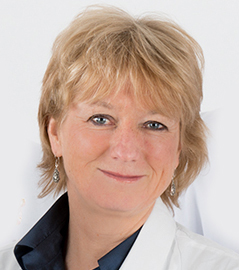 We are delighted to announce the re-appointment of Dr. Morag Park as Director of the Rosalind and Morris Goodman Cancer Research Centre (GCRC), Faculty of Medicine, McGill University. Dr. Park first took on this role in 2013.

A native of Scotland, Dr. Park joined the Faculty of Medicine in 1988 following a Postdoctoral Fellowship at the National Cancer Institute of the National Institutes of Health. Dr. Park is a James McGill Professor of Biochemistry and Oncology, as well as the Diane and Sal Guerrera Chair in Cancer Genetics. She is the former Scientific Director of the Canadian Institutes of Health Research (CIHR) Institute of Cancer Research, and in the past held a variety of positions, including Director of the McGill Molecular Oncology Group, joint head of the Cancer Axis at the McGill University Health Centre and member of the Fonds de recherche du Québec ‐ Santé (FRQS), Réseau Cancer. She is and has been a member of the board of several cancer research organizations, including the Canadian Cancer Society, the American Association for Cancer Research International and the WHO-International Agency for Cancer Research.

Dr. Park has been recognized with numerous awards, including the Canadian Cancer Society’s Robert L. Noble Prize in 2017, the Canadian Society for Molecular Biosciences Arthur Wynne Gold Medal Award in 2016, and the Canadian Cancer Research Alliance Award for Exceptional Leadership in Cancer Research in 2015. She was also recently named Fellow of the Canadian Academy of Health Sciences and has been a Fellow of the Royal Society of Canada since 2007. She currently holds research grants from the FRQS, the CIHR, the Quebec Breast Cancer Foundation and Stand Up to Cancer.

Over the last 30 years, Dr. Park has honed her research interests in the molecular mechanisms of cancer, in particular on the Met receptor tyrosine kinase and signalling pathways that regulate cell migration and invasion in cancer. More recently, she has begun to explore how multiple genetic alterations and epigenetic events synergize to promote tumourigenesis and progression in human breast cancer. Her work highlighted the importance of the tumour microenvironment in cancer progression. Her work has resulted in the publication of over 200 papers in peer‐reviewed journals. She is a valued teacher in the Department of Biochemistry as well as a graduate student supervisor.

During her first term as Director of the GCRC, Dr. Park has been instrumental in enhancing the Centre’s reputation by securing funding and recruiting top young scientists from around the world. Dr. Park has promoted an integrated cancer research vision for the Faculty of Medicine and the McGill network, promoting that research be conceptually integrated across the McGill campus and its affiliated hospitals and the Rossy Cancer Network, leveraging new opportunities for scientific discoveries that will ultimately have a positive impact on patient care. Within the Faculty of Medicine, Dr. Park is the key advisor on all academic matters concerning the GCRC and plays an active role in the Centre’s fundraising and recruitment efforts.

We are confident that under Dr. Park’s continued directorship, the Rosalind and Morris Goodman Cancer Research Centre will remain at the forefront of cancer research in Quebec, Canada and internationally.

Please join us in wishing Dr. Park continued success in this important role.