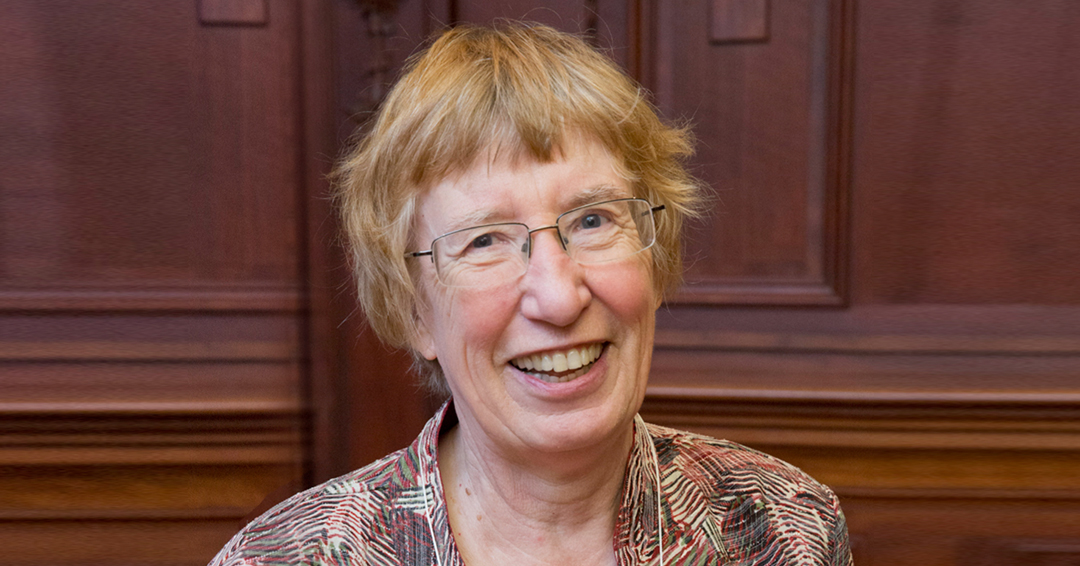 Dr. Claire Weidemier (MDCM’64) built her medical career, as well as her later quilt restoration projects, on helping people in their most distressed moments.

As one of the first physicians practicing emergency medicine, Dr. Claire Weidemier (MDCM’64) never knew who would walk through the door. Her patients did not expect to need a doctor. Weidemier’s enrollment at McGill in 1960 was also somewhat unexpected.

With only $25 available and determined to study medicine, Weidemier applied to three medical schools during her last year in zoology at Cornell University. The first $10 paid for her application to Cornell’s medical college and another $10 went to Yale’s School of Medicine.

The remaining $5 was enough to apply to McGill on the recommendation of a physician alumnus in Ithaca whose children she used to babysit. Only weeks after submitting her application, Weidemier was invited to study in Montreal. “I had no money to go there for the interview, so I never had one,” she said with a laugh, speaking from her home in Southern California.

Money would be a persistent problem. Unlike at Cornell, Weidemier did not have a full scholarship. In order to cover tuition—which was, thankfully, much less than in the U.S.—she commuted from Notre-Dame-de-Grâce where she took care of a teenager with developmental disabilities. In her second year, she worked as a live-in tutor for a family in Westmount.

During the clinical part of her medical degree, Weidemier moved in with two other students. “I lived very close to the bone the whole time,” she said, even though her monthly rent was only $37.50. One year around Christmas, Merle Peden, who was secretary of the Faculty of Medicine from 1953 to 1967, handed her $25, which had supposedly been donated to the university. “I wondered even then if she had donated it herself.” For years, Weidemier returned the favour by sending Miss Peden money to distribute to students. (Today, Merle Peden, who is remembered fondly by many MDCMs, has an endowed bursary in her name courtesy of the Medicine Class of 1957.)

Along with school and work, Weidemier was juggling a position in the Medical Undergraduate Society and extracurriculars. Although Weidemier was in a class with a dozen women (which was quite a lot at the time, she says), she longed for like-minded female connections who were also first-generation university students.

Weidemier grew up in Connecticut. Her father worked in refrigeration and her mother was a bookkeeper. Her father would wax lyrical about the time he hitchhiked to California. So, when Weidemier graduated from McGill in 1964, she was California bound. She started as a rotating intern in San Francisco, then took a family practice residency in Santa Barbara, where she realized family medicine was not what she wanted. After dropping out of the residency, she stumbled on a part-time emergency medicine job at a local hospital. It was a match.

“I describe emergency work as a puzzle where the pieces are always changing.”

She kept heading south, this time to Santa Monica Hospital where she became the first full-time emergency doctor. She worked 60 hours a week: Monday to Friday from 7 a.m. to 7 p.m. “At the time, there was no emergency medicine residency, so we just learned by doing and taking parts from all the specialties we needed,” she said. “We saw about 25,000 patients a year.”

In the early days of emergency medicine, the physicians answering the call were restless, says Weidemier. “These were people who didn’t fit the medical mold.” Some were returning from the Vietnam War. Many flew their own planes to service small communities.

“This field did not exist before World War II.”

Because of migration across the country after the war, “people were no longer in communities where they had a family doctor, and they would go to the hospitals for help.” The emergency room was where patients sat until hospital staff called on any available doctor, no matter their specialty or subspecialty. “People were not getting good care there.”

The practice area was so new it would take a decade after Weidemier graduated before an emergency medicine program was introduced at McGill—the first in Canada. This October, McGill celebrates 50 years of teaching emergency medicine.

In 1980, after working in several hospitals, Weidemier was asked to head an urgent care clinic in a new medical building in Irvine, California. Urgent care differed from the emergency room in that patients did not stay overnight or arrive in ambulances. Many walk-ins had broken bones, the flu, or other minor injuries and illnesses. Weidemier was responsible for keeping the lights on and ensuring access to care every day.

“In the urgent care clinic, I did everything. I did the PR and the books, and paid the payroll. I worked from eight in the morning until 10 at night and then I went home and washed the gowns,” she said. The hardest part was getting a loan to cover start-up costs—she had to put her house on the line to access credit.

She ran the clinic for five years, and even opened another clinic with a partner in nearby Chino before selling her practice.

“I suspect I may have been the first or one of the first women in the country to run a freestanding urgent care clinic.”

With her second husband, she bought a home in the country outside San Diego and found a new passion in quilting. “I never had an interest in sewing as a child. I sewed people before I ever sewed fabric,” she said. But when she found a quilt top made by her great-grandmother, she decided to finish it. In the process she learned more about quilting and about her genealogy. She began buying quilts from antique stores and when mice threatened their integrity in storage she sold them, bought some more, and sold them again. Her newfound interest in bespoke patchworks became a not-so-lucrative business: “I was working really hard and not earning any money.”

After 10 years in semi-retirement, Weidemier returned to the urgent care clinics in San Diego. Practicing in the mid-90s meant updating her professional skills and navigating new working dynamics after being the boss for years. She felt she could save the clinics time and money, so she enrolled in an MBA program. “I did very well. I loved beating these guys who worked for Hewlett-Packard in the math classes,” she laughed. “It was like going back to school as a kid.” When she finished, she wanted to work in administration. “But they wanted me to keep working in the pit, as we call it—the clinical part.” She continued to work in clinics for several years until her knee gave out and she retired from medicine.

Retirement from emergency care led to new opportunities. Under her married name McKarns, Weidemier pursued quilt restoration and researching genealogy for others. Her quilting group meets on the historic Bumann Ranch of Olivenhain, which was established in 1886. She makes about 100 quilts a year for charity, transforming scraps of fabric into attractive bed covers to share the warmth with people who need it.

In 2019, while browsing in a fabric supply shop, 80-year-old Weidemier spotted Tristan Detwiler, a 21-year-old design major with a similar interest in repurposing materials. “She said, ‘What’s a good-looking young boy like you doing in a sewing store?’” Detwiler told The New York Times, and an unlikely friendship was born.

“He came over and began buying some of my old quilts,” Weidemier said. In spring 2021, those quilts made it to the virtual runway of New York Fashion Week with a short film about Weidemier and her quilting group. In fall of that year, Weidemier was invited to model. “I never thought my 15 minutes of fame would come from a men’s fashion show,” she said. A long coat and pants made from one of her favourite quilts is now on display at the Metropolitan Museum of Art.

While Weidemier continues to give new life to old fabrics, she is also leaving behind a legacy to her alma mater. She has generously named McGill in her will. “The education I received there was responsible for me having a terrific career and an interesting life,” she said. McGill provided some of the early pieces of Weidemier’s personal patchwork, so it felt only natural that she would give back.