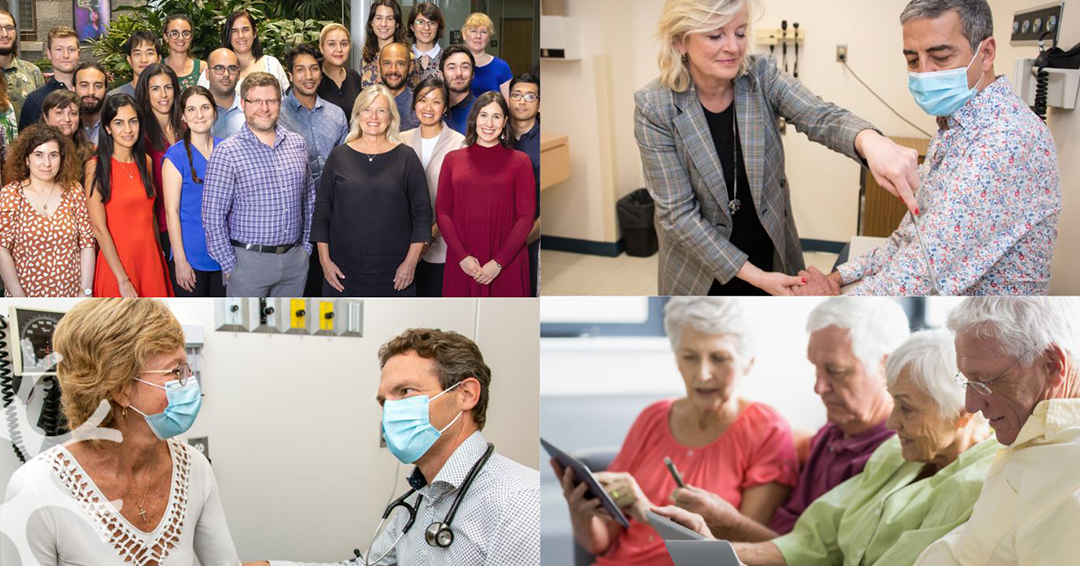 The Clinical Research Unit (CRU) at The Neuro strives to make all neurological and rare diseases treatable, with a focus on conditions that have no available treatment options. 2022 saw significant advances in the unit, exploring new disease indications, and joining international efforts to better understand complex conditions. Here is a look back at a few highlights.

As we get older, some neurotransmitters (chemicals used by neurons to communicate) in the brain that are important for attention and for brain plasticity (the ability of the brain to remodel) tend to go down naturally. That process is accelerated in some neurodegenerative disorders, like Alzheimer’s. A study at the CRU is looking at the impact on neurological health of a computerized brain training program using speed and alertness training. In addition to participants’ scores on standard measures of cognition, the study will also evaluate levels of acetylcholine, a neurotransmitter which is produced when we concentrate. Learn more.

ALS: Amyotrophic Lateral Sclerosis presents and progresses differently in each patient making it extremely challenging to develop one size fits all therapies for this devastating disease. Canadian researchers are hoping to better understand this variability through a new research platform launched this year. CAPTURE ALS will increase collaboration between scientists and involve patients while developing the world’s most detailed and comprehensive picture of the disease. The Neuro is playing a central role through C-BIG, an open access biobank, which will house and share all the data and samples collected from de-identified participants across Canada. Learn more.

Genetic Variants: An article by the CRU’s National Programs Manager for Genetic ALS and collaborators at The Neuro points to ways that open science can help identify patients who would otherwise risk being left in the dark as to their genetic status and treatment options. By analyzing samples from ALS patients collected by the Neuro’s C-BIG biobank prior to new genetic screening becoming available in 2020 for the ATXN2 gene, the team was able to identify four individuals with variants of this gene who were unaware of their status.  As more genetic variants important in ALS are identified, patients will become eligible for new clinical trials tailored to their genetic status Learn more.

Parkinson’s Disease: Funded by the Michael J. Fox Foundation, the groundbreaking Parkinson’s Progression Markers Initiative (PPMI) study analyzes biological markers and clinical presentation — function and feeling — to track changes over time. By learning everything we can about how the disease develops, we can create better targeted therapies and test them more accurately in clinical trials. This study is following patients comprehensively from the earliest (prodromal) stage of disease — before they even present in a doctor’s office with tremor or rigidity — at the time when they may develop mood disorders, loss of smell and REM sleep behaviour disorder, all of which have a strong correlation with developing the disease. One of the goals of the study is to develop neuro-protective therapies able to stop or prevent the disease. Learn more.

A WIN FOR RARE DISEASE

Myasthenia Gravis: Until 2017, there had been no new drug for Myasthenia Gravis (MG) in almost 60 years. Some individuals with MG do not respond well to available treatments, which usually involve the long-term suppression of the immune system. The CRU has been involved in studying more selective treatments able to target specific aspects of the immune response. Over the last two years, a number of new therapies have been approved that are far more precise in treating MG. Learn more.

FIRSTS AT THE CRU

Essential Tremor: The most common movement disorder is one that you have probably never heard of. Essential Tremor (ET) causes an involuntary rhythmic trembling that is triggered by movement and usually affects the hands. It is a slowly progressive disease, worsening over time. It is eight times more widespread than Parkinson’s Disease, but less than 60 percent of patients are helped by the available medications. New ET trials are underway at the CRU for the first time at our centre. Learn more.

Charcot-Marie-Tooth: Despite being more prevalent in Canada than either Cystic Fibrosis or Myasthenia Gravis, Charcot-Marie-Tooth disease (CMT) remains lesser known. In this inherited peripheral neuropathy, 60%-70% of these individuals have a DNA duplication affecting a gene called PMP22, which in turns leads to the formation of too much RNA, which is believed to be toxic. A new trial at the CRU will study how a combination of three commonly used medications could potentially slow the progression of this rare disease. The goal of the medications being tested is to see if they can reduce the amount of this toxic RNA. Learn more.

For more on clinical trials at the CRU, contact info-cru.neuro@mcgill.ca.