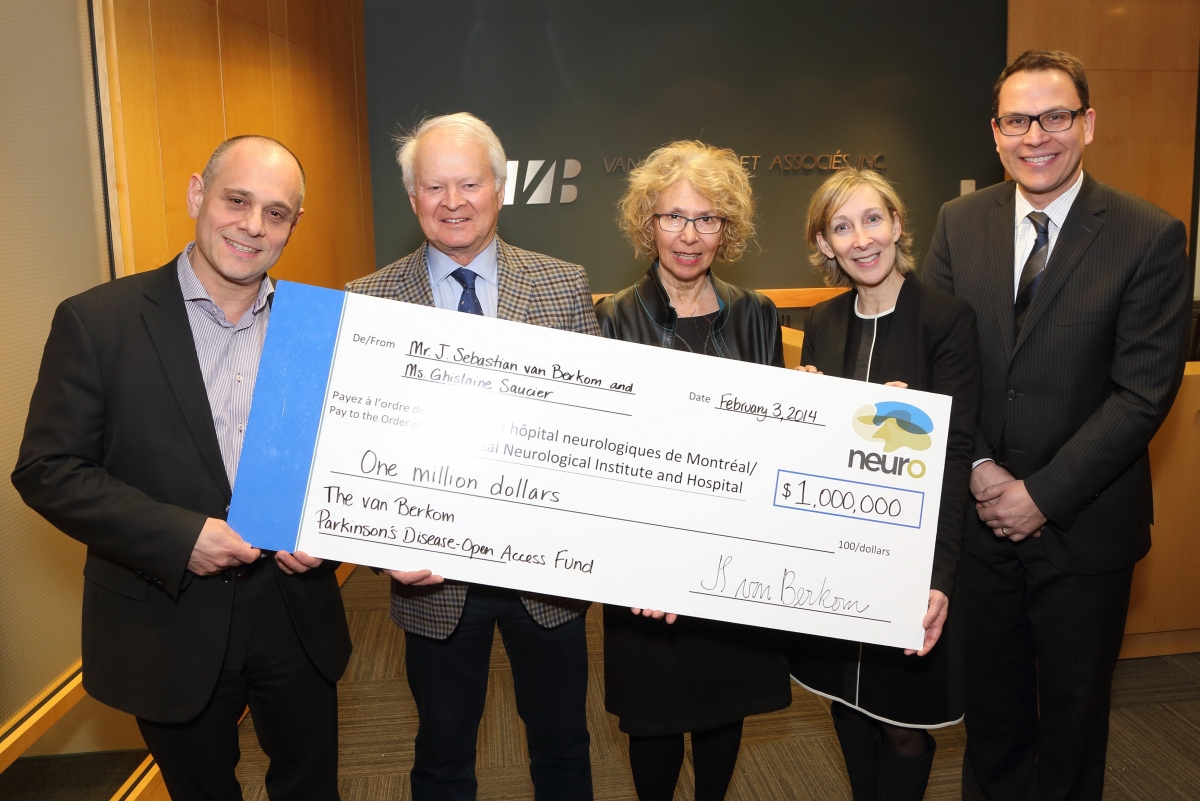 A patient’s very own skin cells may hold the key to new treatments and even cures for devastating neurological diseases. A generous $1 million donation from Mr. J. Sebastian van Berkom, and critical partnerships with Brain Canada, Laval University, Marigold Foundation and the FRQS-Réseau Parkinson Quebec are driving an innovative, iPSC (induced pluripotent stem cell) research platform that will transform research into Parkinson’s and other neurological diseases.

Millions of Canadians are affected by diseases of the brain such as ALS, Parkinson’s and brain tumours, for which there are limited treatments and no cures. By 2020, neurological conditions will become the leading cause of death and disability. “Everyone’s lives are touched in some way by neurological disease, says Mr. van Berkom, President of Van Berkom and Associates Inc.” In creating The van Berkom Parkinson’s Disease Open-Access Fund, I hope to change lives and support new research that will lead to new treatments and one day cures. The iPSC platform is a new paradigm for neuroscience research and as one of the world’s great neuroscience centres, The Neuro is the place to drive it forward.”

“This is the ultimate bench to bedside paradigm, from patient to the bench, back to the patient,” says Dr. Guy Rouleau, Director of The Neuro. “With a unique interface between fundamental and clinical research, The Neuro is uniquely positioned to be a central hub in the iPSC platform. Partnering with Mr. Van Berkom, a generous and visionary philanthropist, propels The Neuro toward the goal of significantly deepening insight into disease mechanisms with unprecedented efficiency.”

Patients’ skin cells will be reprogrammed into induced pluripotent stem cells (iPSCs) at Laval University, under the leadership of Dr Jack Puymirat, and then differentiated at The Neuro into disease relevant cells for research. For example, in the case of Parkinson’s this could be dopamine neurons. The cells can also be genome-edited, a state-of-the-art technique that can introduce or correct disease associated mutations – creating the most accurate disease models. These iPSCs will be made widely and openly available to researchers across Quebec for neuroscience research. This open-access approach exponentially increases the likelihood of breakthroughs in neurological disease.

“The unique and exciting aspect of this platform is that we are creating the most specific cells for studying disease using the patient’s own tissue, which has distinct advantages over using generic cells or animal models,” says Dr. Edward Fon, neurologist and co-Director of the Quebec iPSC platform. “Disease models using human samples are increasingly shown to be far more efficacious in trials, as they much more accurately mimic the disease condition. In the iPSC platform, not only can specific mutations be introduced but, cells are from patients’ whose specific clinical history and genetic profile are known, a first step on the road toward neurological personalized medicine. The Neuro has access to a large and well-characterized patient population, who can help create a rich clinically-and genetically-derived registry and biobank. The initial targets in the platform will be ALS and Parkinson’s disease (PD), using dopamine neurons for PD and both motor neurons and astrocytes for ALS.”

The Quebec iPSC core facility is a provincial core headed by Drs. Fon and Puymirat. Reprogrammed cells at Laval University will be created from different sources such as skin biopsies, blood or urine. The Neuro’s component of the platform will consist of two core facilities. The iPSC neuronal differentiation core – which differentiate iPSCs into functional neurons, headed by Dr. Eric Shoubridge, and the iPSC genome-editing core providing unprecedented ability to study the influence of disease mutations, headed by Dr. Peter McPherson.