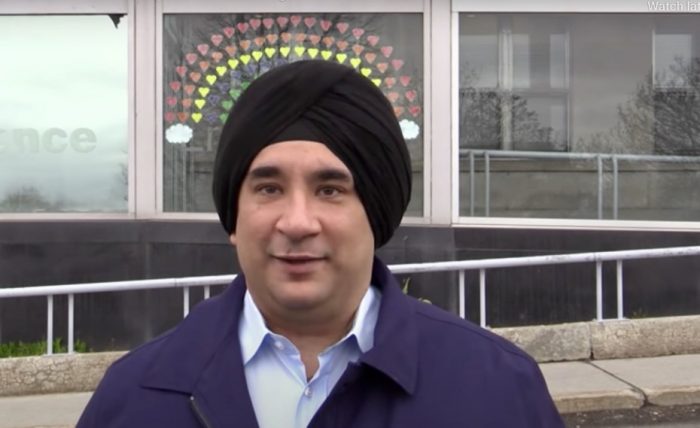 Dr. Sanjeet Singh Saluja and Dr. Karl Cernovitch are co-Associate Directors of Emergency Medicine at the McGill University Health Centre (MUHC) – the literal frontlines of the COVID-19 pandemic in Montreal. “We don’t send many people home at this point,” says Dr. Cernovitch of the current situation. “Most are hospitalized.”

The fluid nature of the pandemic, in which so much is still unknown, is unsettling. “People are stressed,” says Cernovitch, “which makes it all the more important to have Sanjeet here. He has a great sense of humour – which is really important [in Emergency]. Great under pressure, doesn’t crack. He’s the guy I want with me on the frontlines. He’s empathetic, caring and decisive.”

The latter – Dr. Saluja’s decisiveness – was put to the test recently when he was faced with an existential problem that threatened to knock him from the very frontlines where he is so needed.

Dr. Saluja is a devout Sikh and, as such, adheres to Kesh, one of the strongest pillars of his religion in which one’s hair is allowed to grow out of respect for the perfection of god’s creation.

But his beard prohibited Dr. Saluja from properly wearing the N95 masks healthcare professionals are required to wear when dealing with COVID-19 patients.

“To work effectively, the N95 needs a proper seal [to one’s face]. Having a beard, even the slightest facial hair, doesn’t work,” explains Dr. Cernovitch. “During this pandemic, we all have to shave every day, right before starting our shift.”

A calling to serve people

Dr. Saluja could have simply refused to see COVID-19 patients. But that would go against Seva, another pillar of Sikhism, which is service to humanity. “I have always viewed my work at the MUHC as a chance to fulfill my faith’s expectations of service,” says Dr. Saluja.

There was the option of ordering a specialized protective mask but that would mean a delay of several months before it was delivered. With overtasked healthcare workers falling ill, remaining staff was shouldering an ever-increasing load. Waiting was not an option.

“I had to set an example for my group [at the MUHC]. Here I am in a leadership position and I’m not able to do the job fully,” says Dr. Saluja. “I felt a sense of obligation to my colleagues. It wouldn’t be fair to put the burden only on them. I had to do my part.”

He consulted friends, family and members of the Sikh community and, after weeks of soul-searching and more than a few sleepless nights, Dr. Saluja did something he had never done before. On March 30, he shaved his beard.

“It was the hardest thing we ever did,” said Dr. Saluja, whose brother, a neurosurgeon, also shaved his beard. “But we did it because we have jobs to do – to serve patients.”

Healthcare is a team sport

Dr. Saluja is also a member of medical staff for the Montreal Impact professional soccer team, a position the avid soccer fan has held for 11 years. When he sent the team an email explaining his decision, his colleagues were touched.

“His email gave me shivers,” says Karam Al-Hamdani, Head Athletic Therapist for the Impact. “It literally brought a tear to my eye because I realized right there how good and honourable a man he is and how selfless he is.

“It is such an important part of his identity. It really shook me,” says Al-Hamdani. “It is an honour to be able to call him my colleague and friend.”

Al-Hamdani was not alone. Members of the Impact’s leadership group, Al-Hamdani included, produced a video in which they all shaved their beards in solidarity.

It was Dr. Saluja’s turn to be touched. “Healthcare is a team sport and the team really stepped up for me,” he says.

The Impact also produced a second video (see below) in which Dr. Saluja reads the email explaining his decision to shave his beard. “At first, I didn’t want this to be made into a big deal, but after what the team did for me, I wanted to highlight how incredibly supportive people have been,” says Dr. Saluja.

Do the right thing

“I know I made the right decision,” says Dr. Saluja in a phone interview just before heading back for another long shift in Emergency. “But there is still tremendous sadness – the saddest thing I’ve ever done. More than a month later, I still have trouble looking at myself in the mirror.”

“The first day back [after shaving] was actually really good,” says Dr. Saluja. “People knew how hard this was for me and they were very respectful. Most didn’t say anything, no one treated me differently. We just got to work.”

For Dr. Cernovitch, however, Dr. Saluja’s actions say everything you need to know about the man. “He is committed to the art of medicine and committed to his patients. When faced with this very difficult decision, he chose to serve people.”

In the video below, Dr. Sanjeet Singh Saluja reads the email he sent to his colleagues at the Montreal Impact telling them of his decision to remove his beard