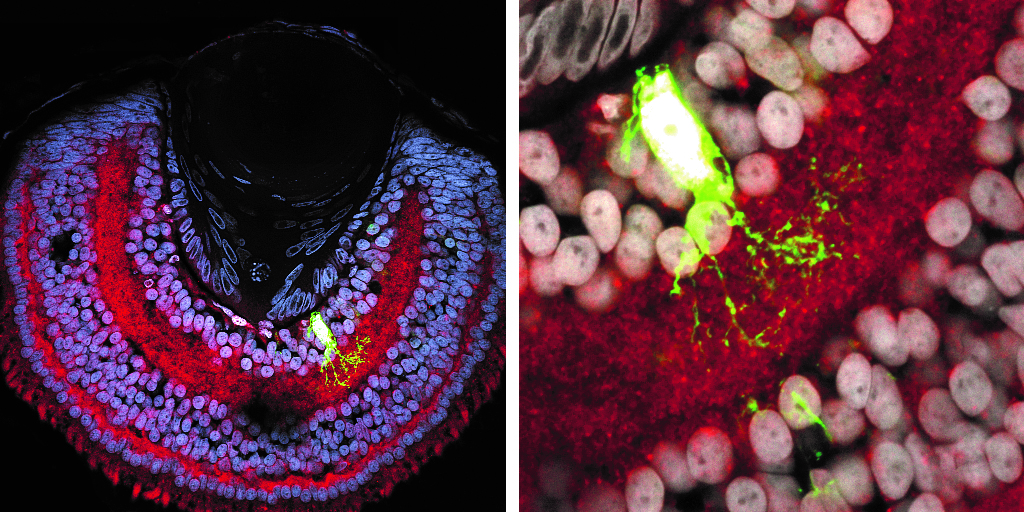 A multidisciplinary team including researchers from the Montreal Neurological Institute has improved our understanding of how cannabinoids, the active agent in marijuana, affect vision in vertebrates.

They found that, contrary to what they expected, activating cannabinoid signaling in tadpoles actually increased the activity in their retinal ganglion cells (RGCs), which are responsible for transmitting information about light detection from the eye to the brain. Previous studies found that cannabinoids typically work to reduce neurotransmission, not increase it.

“Initially you distrust yourself when you see something that goes against widely held ideas, but we tried the experiment so many times, using diverse techniques, and it was a consistent result,” says Ed Ruthazer, a professor of neurology and neurosurgery at the Montreal Neurological Institute of McGill University, and the paper’s senior author. “So then we knew we had to figure out what was going on. The first tendency is to want to ignore it. But it was such a strong effect, we knew there was something important here.”

What the researchers found is that one class of cannabinoid receptor, known as CB1R, plays a role in the suppression of chloride transport into the RGCs. When the receptor is activated, chloride levels are reduced, which hyperpolarizes the cell, making it able to fire at higher frequencies when stimulated.

For the tadpoles, this meant they were able to detect dimmer objects in low light than when they had not been exposed to increased levels of cannabinoids. The team used software developed with McGill physics and chemistry professor Paul Wiseman to detect behavior changes in the tadpoles.

It is too early to say if cannabinoids have the same effect on human vision, but there is anecdotal evidence in scientific literature of cannabis ingestion improving night vision of Jamaican and Moroccan fishermen.

What’s more interesting however, according to Ruthazer, is that they have discovered a previously unknown role for cannabinoids in brain signaling. Therapeutic use of cannabinoids is becoming increasingly accepted by the medical community, and the need for an accurate and thorough understanding of these chemicals’ role in the brain is greater than ever.

“Our work provides an exciting potential mechanism for cannabinoid regulation of neuronal firing, but it will obviously be important to confirm that similar mechanisms are also at play in the eyes of mammals,” says Ruthazer. “Though technically more challenging, a similar study should now be performed in the mouse retina or even in cultures of human retinal cells.”

The full research paper was published in the journal eLife on Aug. 8, 2016, and was made possible with funding from Canadian Institutes of Health Research, Fonds de recherche du Québec – Santé, Épilepsie Canada, and a Natural Sciences and Engineering Research Council CREATE Neuroengineering Training Grant.

The Montreal Neurological Institute and Hospital

The Montreal Neurological Institute and Hospital – The Neuro – is a world-leading destination for brain research and advanced patient care. Since its founding in 1934 by renowned neurosurgeon Dr. Wilder Penfield, The Neuro has grown to be the largest specialized neuroscience research and clinical center in Canada, and one of the largest in the world. The seamless integration of research, patient care, and training of the world’s top minds make The Neuro uniquely positioned to have a significant impact on the understanding and treatment of nervous system disorders. The Montreal Neurological Institute is a McGill University research and teaching institute. The Montreal Neurological Hospital is part of the Neuroscience Mission of the McGill University Health Centre. For more information, please visit www.theneuro.ca