Regular community-wide screening for active and latent tuberculosis (TB) appears to be cost-effective in Inuit communities with high TB rates and is recommended to help reduce outbreaks, according to new research published this week in the Canadian Medical Association Journal (CMAJ). The study was led by Dr. Kevin Schwartzman, Senior Scientist in the Translational Research in Respiratory Diseases Program (RESP) at the Research Institute of the MUHC (RI-MUHC) and Director of the Division of Respiratory Medicine at the McGill University Health Centre (MUHC). 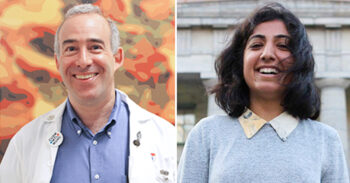 In 2019, TB was the deadliest infectious disease worldwide. It disproportionally affects vulnerable communities, especially Canadian Inuit, as a lasting impact from colonization and socioeconomic inequalities. In 2017, the rate in Inuit communities was 40 times higher than in the rest of Canada. The national representative organization for Inuit in Canada, Inuit Tapiriit Kanatami, and the Government of Canada have pledged to eradicate TB in the Inuit homelands by 2030.

In Nunavik, the Inuit homeland in northern Quebec, the Nunavik Regional Board of Health & Social Services (NRBHSS) has led community-wide TB screening initiatives as part of its TB elimination plans.

To assess the immediate and potential effects of such screening initiatives, the NRBHSS partnered with researchers from the RI-MUHC. Together, they looked at data from active TB screening programs conducted in two Nunavik villages in 2019, then used a model to predict future outbreaks in the presence and absence of future screening programs. They found that community-wide screening reduced the number of infections and was cost-effective compared to no screening, depending on the scenario.

“Historically, community-wide screening has been implemented after outbreaks,” writes Dr. Schwartzman, also a respirologist at the Montreal Chest Institute of the McGill University Health Centre, and professor of medicine at McGill University, Montreal, Quebec, Canada, with coauthors. “The ideal screening program will prevent future outbreaks, but it is impossible to predict exactly when an outbreak will occur. The high cost of care for TB in Canada’s North makes preventive interventions more cost-effective.”

“We suggest that active screening can be part of a larger campaign to reduce TB,” says first author Aashna Uppal, MScPH.

“Tuberculosis continues to exact a large and disproportionate burden on many Inuit communities across Canada’s North,” write the authors. “We anticipate that community-based screening, supported by prompt and effective treatment of both active TB disease and latent infection, can play an important role in communities with the highest incidence.” At the same time, it is essential that providers and leaders work effectively with communities to tackle the health and socioeconomic disparities underlying the epidemic.