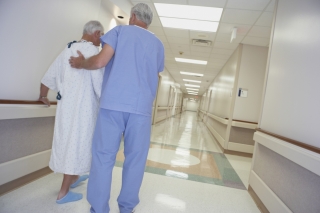 “Not too little and not too much” physical activity shows promise in reducing cancer-related fatigue, according to a team of researchers at McGill University.

Fatigue is one of the most pervasive symptoms associated with cancer, adding to distress and affecting everyday life, yet little research has been done into how to deal with the problem. Now, Nancy Mayo, a professor in McGill University’s School of Physical & Occupational Therapy, is tackling the challenge. Mayo is also a researcher at the Centre for Outcomes Research and Evaluation of the Research Institute of the McGill University Health Centre.

In a recent pilot study, she implemented a personalized walking exercise program over an 8-week period for 26 people with advanced cancer, in an effort to reduce their level of fatigue.

“We tailored individualised walking programs based on each participants’ current walking status, which was measured using a pedometer and progressed according to their individual fatigue level. For example, participants who walked less than 5,000 steps per day were to increase their daily steps by 10% every week, if fatigue remained the same or improved, the number of steps was to be increased.  If the individual’s fatigue level worsened, no increase; if fatigue levels worsened for two weeks in a row, the steps were to be decreased by the same amount as the increase”

“We found the effect on fatigue was quite strong; walking promoted better physical function, and enhanced overall well-being. Interestingly, shorter bouts of low intensity exercise and shorter duration overall had a promising effect on cancer related fatigue. This is compatible with the theory of emphasizing the need to build, not deplete, resources. While our small study showed promise, more testing is needed in a full study”

Mayo has applied to the Canadian Institutes of Health Research to continue this valuable work.

This research was funded by the MUHC and Research Institute of Pilot Project Competition. The study was set at the McGill University Health Centre (MUHC) Cancer Nutrition and Rehabilitation (CNR) Program