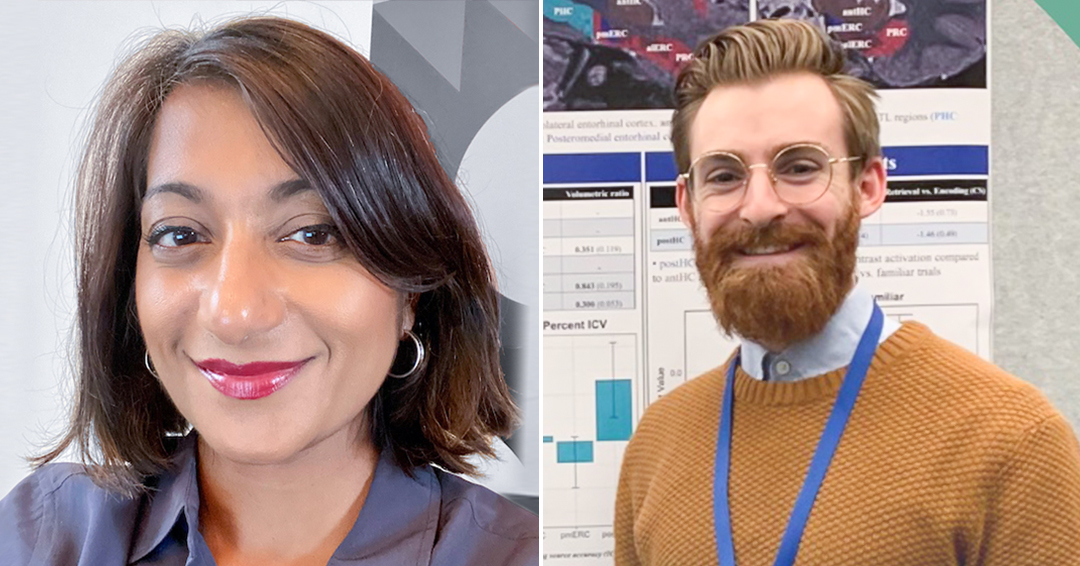 Dr. Natasha Rajah is a researcher at the Douglas Research Centre and a Professor in the Department of Psychiatry at McGill University. She also holds a Research Chair in Sex & Gender from CIHR’s Institute of Mental Health and Addiction. She leads the Cognitive neuroscience of memory, aging and dementia prevention lab, which addresses memory capacity in elderly people and prevention of dementia. She and one of her PhD students, Jamie Snytte, answered some questions about their most recent study.

Hello Dr Rajah. Can you tell us about the major research questions you are currently pursuing in your lab?

My lab uses brain imaging and behavioral experimentation to understand how the brain encodes and recalls memories about past personal experiences in rich spatial and temporal details, a type of memory called “episodic memory”. We use functional MRI to discover what brain systems are affected with aging and contribute to age-related memory decline in middle-aged and older women and men with and without risk factors for Alzheimer’s disease.

Researchers don’t usually work alone in their lab. Can you tell me more about the way your lab is organized and how many students you have working together?

My lab is composed of an excellent team of research assistants, undergraduate and graduate trainees and postdoctoral researchers. We work collaboratively on all the neuroimaging studies underway in my lab. The current project was led by Jamie Snytte, a PhD candidate in Clinical Psychology, whom I co-supervisewith Dr. Signy Sheldon at the Department of Psychology at McGill University.

So, a major area of interest for your lab is cognitive decline in elderly people, but you also recruit healthy adults for your research. Why is this important?

Aging in general is associated with memory decline – and is apparent in healthy adults at midlife and older age. So, it is very important to know what is ‘normative aging’ and what brain systems are affected by it, in order to discern early signs of pathological aging which may be indicative of dementia or another age-related neurodegenerative disorder. We must know what is normative to understand what is pathological.

Jamie, you recently published an article in Neuro Image. Can you tell us a little bit about it?

We were interested in investigating how certain brain structures change across the lifespan, and how this affects our memory. First, we found that the older our participants were, the worse they performed on our memory tasks. However, this depended on the size of a particular structure called the hippocampus, specifically the portion of this region that falls closer towards the back of the brain – the posterior hippocampus. That is, it was not just age itself that contributed towards worse memory, but instead the effects of age on the volume on this structure that likely impacted memory performance.

If we understand this correctly, memory decline during healthy aging shows a pattern that shifts depending on the age of the individual. What does that look like in typical older adults?

That’s it! Memory performance will depend on the size of this structure, and also on how the brain can respond by activating different regions to support our memory. We found that middle age and older adults who had smaller volumes within their hippocampi were able to activate different regions across the brain to successfully complete our task.

Dr. Rajah, what are the implications of this work, both in terms of theoretical understanding of healthy aging, and also for clinical populations?