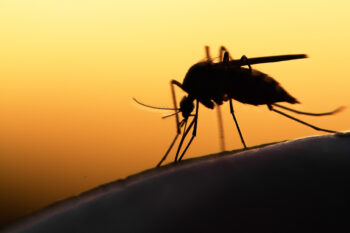 Malaria, a life-threatening disease usually caused when parasites from the Plasmodium family enter the bloodstream of a person bitten by a parasite-carrying mosquito, is a severe health threat globally, with 200 to 300 million cases annually and 445,000 deaths in 2016.

With pregnant women and children most vulnerable from infection, complications including anemia and cerebral malaria, the most severe neurological complication from malaria, are responsible for approximately 25% of the infant mortality rate in some regions of Africa.

While uncomplicated clinical malaria is treatable with antimalarial drugs, treatment options for cerebral malaria are few and those that do exist are limited in their effectiveness, a problem compounded by the emergence of resistance in the parasites.

A recent study led by postdoctoral fellow Dr. David Langlais at McGill University that was conducted as a collaboration between the labs of Dr. Philippe Gros, Professor in the Department of Biochemistry and Vice-Dean, Life Science, and Dr. Jerry Pelletier, Professor in the Department of Biochemistry, shows that rocaglates – a class of naturally-derived products from plants of the Aglaia species – effectively block blood-stage parasite replication in several mouse models as well as in infected human red blood cells.

Importantly, the researchers showed that these products inhibited neurological inflammation and increased survival, including in drug-resistant isolates, highlighting the strong potential of this class of compounds to be used for therapeutic treatment of complicated malaria cases in humans.

“Rocaglates as dual-targeting agents for experimental cerebral malaria” was published in the most recent issue of PNAS.