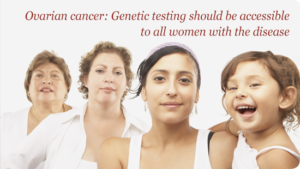 Montreal April 15th, 2015 – The genes BRCA1 and BRCA2 play a significant role in hereditary breast and ovarian cancers. Recent media attention has focused on American actress Angelina Jolie’s decision to have her ovaries and fallopian tubes surgically removed after genetic testing for such cancers. A study led by a team from the Research Institute of the McGill University Health Centre (RI-MUHC) in collaboration with the Centre de recherche du Centre Hospitalier de l’Université de Montréal (CRCHUM) and the Jewish General Hospital; suggests that all women with ovarian cancer should be tested for these genes, regardless of their family history. The findings, published in the Journal of Ovarian Research, have clinical implications both for the treatment of this disease and for the screening of individuals at-risk.

“Our findings suggest that all women with the most common form of ovarian cancer should be offered genetic testing as this would help identify carrier women in their families and allow health professionals to offer risk reducing strategies for their relatives,” says lead author Dr. Patricia Tonin, Associate Leader of the Cancer Research Program at the Centre for Translational Biology of the RI-MUHC. “Currently, only women with a family history of breast and ovarian cancer are offered genetic testing, and if they happen to carry BRCA1 or BRCA2 mutations they are given cancer prevention strategies to reduce their risk for these cancers.”

Dr. Tonin and her colleagues examined more than 400 tissue samples from a unique population of French Canadian women with ovarian cancer that were not selected for their family history of cancer. Analysis revealed that 19 per cent of women with the most common and lethal form of ovarian cancer carry mutations in BRCA1 and BRCA2, which is considerably higher than the previous estimates of 4 to 11 per cent.

“Women with a mutation in one of their BRCA genes have an increased risk of developing ovarian cancer in their lifetime,” says Dr. Tonin, who is also an associate professor at McGill’s Departments of

Medicine and Human Genetics and one of the co-discoverers of these genes. “They could be offered prevention strategies such as ovary and fallopian tube removal, which is the only proven effective method for reducing the risk of developing ovarian cancer. Given this risk and the lethality of ovarian cancer it is critical to identify the women who have these inherited gene mutations and at this point, genetic screening is the only option.”

Successful treatment of the disease may also be related to the BRCA gene-mutations. “Many of the current ovarian cancer therapies are not effective long-term,” adds Dr. Tonin. “However, new clinical trials show that women with ovarian cancer who carry these BRCA mutations are very responsive to some of the newer therapies. These findings rationalize genetic testing for all women with ovarian cancer, which is currently not the standard of care. We need to inform women of the benefits of this option.”

There are 17,000 Canadian women living with ovarian cancer. It is estimated that this year in Canada, 2,600 women will be newly diagnosed with this disease. Ovarian cancer is the fifth most common cancer for women and is the most fatal women’s cancer. Ovarian Cancer Canada: http://www.ovariancanada.org/about-ovarian-cancer

This research was made possible by funding from the Cancer Research Society of Canada and in part by funding from the Fonds de recherche du Québec-Santé, RI-MUHC, McGill’s Faculty of Medicine, Ovarian Cancer Canada, and the Canadian Institutes of Health Research.