By Dr. Sara Ahronheim
On March 11, 2021, we will celebrate the first Canadian Women Physicians Day.  To mark this remarkable date, the CWIM blog will feature stories about Canadian women physicians who make a difference in the lives of millions of people across our country, on a daily basis.  This is the first installment of the series. 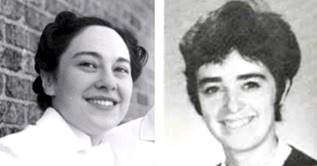 Let’s begin with a story about two women physicians who fought hard for their careers and their families: a very special woman that I know well, my mother, and one that I always loved but knew less well; my grandmother.

My journey into medicine began very early in my childhood, when my parents (both community based pediatricians who also worked in tertiary care academic centers) would talk about their days over meals in our brightly lit kitchen.  Sitting at our cozy, circular wooden table with my sisters at my sides, I would pretend to read Nancy Drew or The Babysitters Club while simultaneously listening to the stories they would tell each other about patients, parents, and colleagues.  I never grew tired of hearing about my mom caring for babies in the newborn nursery, or the difficulties my dad had in the microbiology lab, or the heartbreaking moments my mother experienced in the pediatric heme-onc ward.  Their words framed my existence, their tales became my tales, their lived experiences ones that I yearned to emulate.

Coming from generations of physicians (mostly men), I suppose medicine was in my blood; knowing that two extraordinary women before me had overcome significant obstacles to become doctors, strengthened my resolve to become one as well.  My paternal grandmother, Dr. Sylvia Edith Ahronheim (née Hirschorn) began her medical studies in Vienna, Austria.  In her third year, she escaped the Nazis by having the foresight to hide her valuables in her clothing and move to Lausanne, Switzerland to finish her training, after witnessing Hitler parade through the streets.  She eventually moved to Jackson, Michigan for internship.  She became a “house physician” in hospital and emergency, before having seven children and later tending to prisoner health in the jail nearby.  Her story of resilience in the face of atrocity, perseverance when challenged by evil, and strength enough to mother a huge brood of kids while continuing to work as a physician, buoys me on the hard days at work.

It’s hard to know where to begin when attempting to describe how amazing and unique my mother, Dr. Naomi Stein, is.  It’s not just because she is my mother, and thus the center of my childhood world, compass of my adult journey.  It’s not only because she raised three strong, independent daughters to follow her lead.  My mother is also a terrific example of what human beings can attain if they are altruistic, passionate and kind hearted.  As a pediatrician, my mom has been responsible for the health and wellbeing of thousands of children over the course of her fifty-plus year career.  Since I was a child, wherever we would go as a family (be it downtown Montreal or places such as Israel, Mexico and Europe) there would inevitably be numerous episodes of patients and their families coming up to hug my mom and meet her children.  We felt like rock stars!

It’s hard to fathom just how many lives she has touched; it feels like not only is she the mother of our family, she is also a mother figure to a couple of generations of Montreal children.  Those children, and their parents, continue to amaze me when they recognize me as my mother’s daughter even in full PPE examining them in the emergency department.  My whole life, I have admired the way my mother cares about her patients; she has always gone out of her way to call families from our home at the end of her workday if necessary, to check up on a child she was worried about.  This caring is evident to her patients and their families, who speak of her with the utmost love and respect.

Yet even with her dedication to the children of Montreal, her devotion to her own children and husband has always been first and foremost.  My mom came from a childhood of relative poverty, struggled through paying for her own schooling, managed to become a physician in a time when there were quotas on women and Jews in medical school (she graduated in 1969), and succeeded to give her own children the luxuries in life that she never had.  Now my mother, at age 76, is a Bubby to three incredible grandchildren, very involved mother to her three adult daughters and is still practicing full time pediatrics via telemedicine during this pandemic. When I followed my mother’s footsteps into McGill’s medical school in 2003, our class was almost equally divided into men and women.  It’s hard to imagine that there was once a limit on how many women were allowed to train as physicians in Canadian medical schools.  I hope this article, though brief, serves as a testimony to the incredible women physicians who came before us, and thanks them for opening the door to generations to come. Without their determination and grit, it’s possible society would look quite different today.