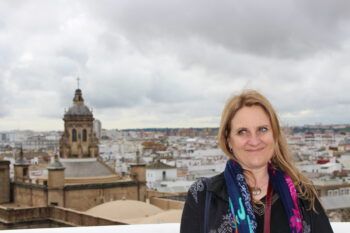 Growing up as a bilingual child, Dr. Elin Thordardottir, Professor in the School of Communication Sciences and Disorders at McGill University’s Faculty of Medicine, knows firsthand the challenges of learning multiple languages…and the advantages as well. Born in Iceland and having lived in France from the age of 8 to 14, she experienced some of the things she now studies for a living.

“Being the focus of interest in a classroom and not understanding anything. That’s the sort of thing that I have vivid memories of,” she says. “I didn’t have a hard time learning French, but I had a hard time dealing with this kind of situation in school.”

A multilingual professor with a penchant for studying language acquisition and language impairment in a myriad of cultural contexts, Elin is doing just that during her yearlong sabbatical, which has taken her from Montreal to Iceland, Spain and eventually Poland, where she is exploring the cultural differences and similarities in how speech-language pathologists view language impairment and the variables that influence a child’s ability to learn a language.

Over the last decade, she has used her fluency in Icelandic, English and French to explore  how the experiences bilingual children have in each language environment impact the rate at which they learn the vocabulary and grammar of each language, and the results are surprising, even to her.  “We typically think that the earlier, the better, when it comes to learning a second language,” she says. “That idea is being called into question.”

Elin has been comparing children ages 7 and 9 who started to learn a second language very young or from birth (referred to as simultaneous bilinguals) to those who started closer to school age (referred to as sequential bilinguals). What she’s discovered in Montreal – a unique environment with two strong languages – is that the age at which a child begins to learn a second language isn’t as important as the amount of bilingual exposure.

But, what about in Iceland?

With immigration being a relatively new phenomenon in Iceland, children are learning Icelandic for the first time as a second language and it appears amount of exposure to the language doesn’t come out on top as predictive of language ability, which speaks to a cross-linguistic aspect in the learning process. One potential variable she’s been investigating is motivation – the economic value of the language to be learned. Icelandic is a minority language on a global scale, meaning that it’s rarely used anywhere but in that country. This has led Elin to explore immigrant children’s learning of English as a third language because some of them say that they’re better at English or that it’s more interesting.

“This kind of thinking strays from the passive measure of amount of exposure to looking at the role of the person in the learning process,” she says.

Dr. Thordardottir has built a solid reputation in her field over her close to 20 years at the School of Communication Sciences and Disorders. Her work has yielded several diagnostic and assessment tools to uncover language impairments in children speaking English, French and Icelandic and to advise parents, both in Quebec and her native Iceland. As Director of Research at the CRIR-Institut Raymond-Dewar in Montreal, she highly values being exposed to a clinical environment, where she can use her scientific insight to recommend appropriate assessment and intervention methods to clinicians.  She recently received the 2017 Editor’s Award from Speech-Language and Audiology Canada for her paper, “Long versus short language samples: A clinical procedure for French language assessment”.

In addition to developing a number of tools to assess French language ability in Quebec, her work has also led to the development of a particular assessment test for Icelandic as a second language, which is used in all schools in Reykjavik to determine language ability of immigrants. She also influenced policy changes in the number of years and kind of Icelandic as second language services offered to children in Icelandic schools.

As Vice-Chair of a European Union Cost Action project focused on enhancing services for children with language impairment across 34 countries in Europe she is further investigating the cultural differences in how language impairment is defined, how it is diagnosed, what kinds of services are offered, and access and barriers to available services.

“My research views have changed over the years and that’s what research is supposed to help you do,” she says. “For me, it’s about addressing theoretical questions that have practical relevance.” Armed with new knowledge and a more globally-rich research perspective, Elin will return post-sabbatical to McGill in September, ready to continue her lifelong interest in language.