In the summer of 2017, Julia Coste, BA’19, got her period on board a packed airplane. It was early—she hadn’t packed any tampons or pads, and the plane wouldn’t be landing for another two hours. Panic settled in as the minutes ticked by. She was trapped.

Coste would eventually disembark and buy what she needed—problem solved—but the experience would nag at her for months. What if, instead of being stuck for just two hours without any products, she couldn’t afford to buy them at all?

For the hundreds of homeless women living on the streets of Montreal, getting their period poses a serious, recurring financial dilemma. An unacceptable one, if you ask Coste.

In November 2017, she and fellow arts student Chloé Pronovost-Morgan, BA’19, decided to tackle this problem head on. Together they co-founded Monthly Dignity, a bulk menstrual product delivery service to homeless shelters across the city.

Neither of them had any experience running a charity, and it was trial-by-fire at first. The two women set up a fundraising webpage, then started going around McGill making nerve-wracking speeches about menstrual bias to classrooms full of students. They held bake sales and set up donation boxes.

Within two weeks, they’d reached their fundraising goal. They purchased 7,000 products from a bulk distributor and stored them at home. “We would drive them to the shelters with whatever car we could find,” recalls Pronovost-Morgan. “Just ourselves, the two of us.”

Those days are long gone. Today, Monthly Dignity works in partnership with Fempro, one of the biggest manufacturers of hygiene products in Quebec. Every time the company changes its product packaging—which happens about once or twice a year—they donate the old products to Monthly Dignity.

Otherwise, those products would go straight to the landfill.

“The first delivery was to their home,” says Fempro’s general manager, Jean Fleury. The co-founders were storing upwards of 21,000 products in their houses, and it became clear pretty quickly that it just wasn’t sustainable. “Let’s say that, if there was any water leak in their house, there would be no issue!” Fleury jokes. 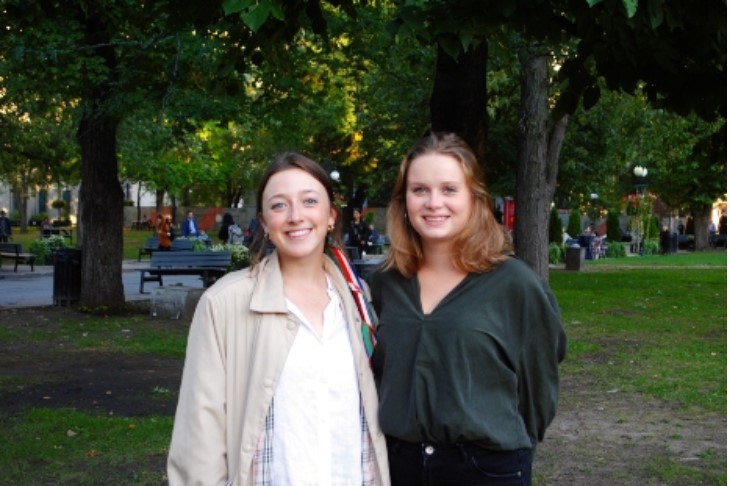 So Pronovost-Morgan and Coste (pictured left) reached out to Moisson Montréal, Canada’s largest food bank. Moisson has an enormous fleet of trucks at its disposal, and more storage space than the two students could ever pay for.

“Sometimes, problems have very simple solutions,” says Pronovost-Morgan, who’s currently studying medicine at McGill with a keen interest in public health policy. “It’s just a question of making the link between two entities that can contribute to that solution.”

By connecting the dots between Fempro and Moisson, Monthly Dignity has been able to provide over 60,000 hygiene products to their seven shelter partners.

And getting these items in bulk makes a huge difference for shelters, says Anastasia (BA’17), house manager at the Native Women’s Shelter of Montreal.

“People are always willing to donate things,” she explains, “but it’s a lot more labor intensive to coordinate individuals coming to us with half a box of tampons.” Having a single source means all Anastasia has to do is make one phone call to Monthly Dignity every couple of months, if that.

Since launching two years ago, Monthly Dignity has been steadily gaining recognition for its work. Forces AVENIR, which recognizes the socially conscious efforts of students across Quebec, gave the group its top prize in the Mutual Aid, Peace, and Justice category this year. The group has also received a grant from Canada 150’s TakingItGlobal project.

For the co-founders, all of this positive attention serves a secondary purpose: eliminating the stigma around menstruation altogether.

“It’s not just about distributing products,” says Coste, “but about the dialogue, which is more long term. If we can have any kind of social impact, it would be really great to make menstruation less taboo.”

Coste is currently living in Paris, where she’s working to get Monthly Dignity’s first international branch off the ground. She takes my call from a crowded metro car, where the service isn’t great. She has to speak loudly and deliberately—over the chatter of nearby passengers—for me to hear everything she has to say about periods.

It’s a far cry from the embarrassment she felt on the airplane. “It’s always uncomfortable, but I’ve gotten used to it now,” she tells me. “It’s fun to watch people have the lightbulb moment when they realize that it’s a problem. It’s not just about periods anymore—the part that makes them awkward or confused. As soon as the poverty part comes in, they get it.”