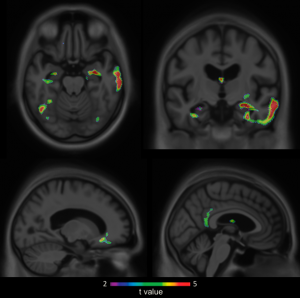 Doctors who work with individuals at risk of developing dementia have long suspected that patients who do not realize they experience memory problems are at greater risk of seeing their condition worsen in a short time frame, a suspicion that now has been confirmed by a team of McGill University clinician scientists.

Some brain conditions can interfere with a patient’s ability to understand they have a medical problem, a neurological disorder known as anosognosia often associated with Alzheimer’s disease. In a study published today in Neurology, Dr. Pedro Rosa-Neto’s team from McGill’s Translational Neuroimaging Laboratory shows that individuals who experience this lack of awareness present a nearly threefold increase in likelihood of developing dementia within two years.

Joseph Therriault, a master’s student in McGill’s Integrated Program in Neuroscience and lead author of the paper drew on data available through the Alzheimer’s Disease Neuroimaging Initiative (ADNI), a global research effort in which participating patients agree to complete a variety of imaging and clinical assessments.

Theriault analysed 450 patients who experienced mild memory deficits, but were still capable of taking care of themselves, who had been asked to rate their cognitive abilities. Close relatives of the patient also filled out the similar surveys. When a patient reported having no cognitive problems but the family member reported significant difficulties, he was considered to have poor awareness of illness.

Researchers then compared the poor awareness group to the ones showing no awareness problems and found that those suffering from anosognosia had impaired brain metabolic function and higher rates of amyloid deposition, a protein known to accumulate in the brains of Alzheimer’s disease patients.

A follow up two years later showed that patients who were unaware of their memory problems were more likely to have developed dementia, even when taking into account other factors like genetic risk, age, gender and education. The increased progression to dementia was mirrored by increased brain metabolic dysfunction in regions vulnerable to Alzheimer’s disease.

The finding provides crucial evidence about the importance of consulting with the patient’s close family members during clinical visits.

“This has practical applications for clinicians: people with mild memory complaints should have an assessment that takes into account information gathered from reliable informants, such as family members or close friends,” says Dr. Serge Gauthier, co-senior author of the paper and Professor of Neurology & Neurosurgery, Psychiatry and Medicine at McGill.

“This study could provide clinicians with insights regarding clinical progression to dementia,” adds Dr. Rosa-Neto, co-senior author of the study and clinician scientist and director of the McGill Center for Studies in Aging, a research center affiliated with the Montreal West Island IUHSSC.

The scientists are now taking this research further by exploring how awareness of illness changes across the full spectrum of Alzheimer’s disease, and how these changes are related to critical Alzheimer’s biomarkers.

This study was supported by the Canadian Institutes of Health Research, the Alan Tiffin Foundation, the Alzheimer’s Association, the Fonds de Recherche du Québec-Santé, and the Centre for Studies on Prevention of AD.