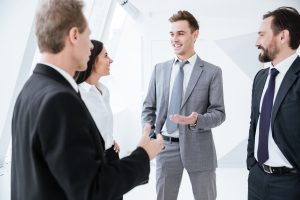 by Philip Fine for Medicine Focus

A person with a confident voice may do more than just make you think he or she is comfortable in their own skin. They could very well convince you that they are more trustworthy.

A recently published study by postdoctoral researcher Xiaoming Jiang found that a confidently spoken phrase elicits a higher degree of trust than one spoken with doubt. A surprising aspect of the study, published in Human Brain Mapping, was that the actors who spoke in neutral tones were perceived as even more trustworthy than those affecting confident tones.

The researchers played a series of statements spoken in three different tones – confident, neutral and doubtful ­­– for 26 test subjects. The simple statements, neither true nor false, included phrases such as “Do you like seafood?” or “She has access to the building.” Their brains scanned on a functional MRI while they listened to the statements, subjects were asked to judge on a four-point scale how believable the speaker sounded.

Confident and neutral voices scored high, while doubtful voices had the subject, well, doubting the person really meant what they said. “If a person sounds more confident, we tend to believe him more than when the person sounds doubtful,” said Jiang, part of McGill’s Neuropragmatics and Emotion Lab, which investigates human communications.

Jiang explains that when we speak and there is a lack of information, the voice colours our decision and changes our impression of a person. “The way that I use my voice can provide a really important cue for you to determine whether you should believe me or not.”

Dr. Marc Pell, who runs the lab and co-authored the paper, says the study showed how the brain responds and makes believability judgments for different types of statements. Through the fMRI, they saw particular parts of the brain involved in the perception and evaluation of the auditory information, namely the temporal and frontal lobes.

“What was very different was how they responded to the neutral voice because, in this case, they had to recruit parts of the brain that are more involved in inferring the speaker’s mental state,” he said.

Pell, who is also Director, School of Communication Sciences and Disorders, sees these kinds of judgments in hiring, where someone qualified might be overlooked because they sound full of doubt. “The voice is a very powerful cue to broader traits such as whether you think someone is competent.”

The study also used a psychosocial tool to assess how trustful the subjects are of others. “We have evidence that the brain responds and makes these judgements in a slightly different way depending on whether you tend to trust or not to trust,” says Pell, who adds that the biases we have developed play a role in this perception.

Jiang continues on that theme: “The brain is like a machine that is incrementally building on different sources of cues. Cues might be coming from how the voice is perceived, the changes in our intonations and from other parts, like the knowledge we’ve formed from our interactions.”