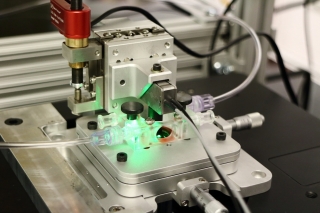 Researchers from McGill University and the Génome Québec Innovation Centre have achieved a technical breakthrough that should result in speedier diagnosis of cancer and various pre-natal conditions.

The key discovery, which is described online this week in the Proceedings of the National Academy of Sciences (PNAS), lies in a new tool developed by Professors Sabrina Leslie and Walter Reisner of McGill’s Physics Department and their collaborator Dr. Rob Sladek of the Génome Québec Innovation Centre. It allows researchers to load long strands of DNA into a tunable nanoscale imaging chamber in ways that maintain their structural identity and under conditions that are similar to those found in the human body.

This newly developed “Convex Lens-Induced Confinement” (CLIC) will permit researchers to rapidly map large genomes while at the same time clearly identifying specific gene sequences from single cells with single-molecule resolution, a process that is critical to diagnosing diseases like cancer.

CLIC, the new tool, can sit on top of a standard inverted fluorescence microscope used in a university lab. The innovative aspect of CLIC lies in the fact that it allows strands of DNA to be loaded into the imaging chamber from above, a process which allows the strands of DNA to maintain their integrity. Existing tools used for genomic analysis rely on side-loading DNA under pressure into nanochannels in the imaging chamber, a practice that breaks the DNA molecules into small pieces, making it a challenge to reconstruct the genome.

“It’s like squeezing many soft spaghetti noodles into long narrow tubes without breaking them,” explains Prof. Leslie as she describes what it is like to use CLIC. “Once these long strands of DNA are gently squeezed down into nanochannels from a nanoscale bath above, they become effectively rigid which  means that we can map positions along uniformly stretched strands of DNA, while holding them still. This means diagnostics can be performed quickly, one cell at a time, which is critical for diagnosing many pre-natal conditions and the onset of cancer.”

“Current practices of genomic analysis typically require tens of thousands of cells worth of genomic material to obtain the information we need, but this new approach works with single cells,” says Dr. Rob Sladek of the Génome Québec Innovation Centre. “CLIC will allow researchers to avoid having to spend time stitching together maps of entire genomes as we do under current techniques, and promises to make genomic analysis a much simpler and more efficient process.”

“Nanoscale physics has so much to offer biomedicine and diagnostics,” adds Prof. Leslie. “CLIC brings the nanoscale regime to the bench top, and genomics is just the beginning”.

The research was funded by the National Research and Engineering Council of Canada (NSERC), Canadian Institute for Health Research (CIHR), and Canadian Foundation for Innovation (CFI).