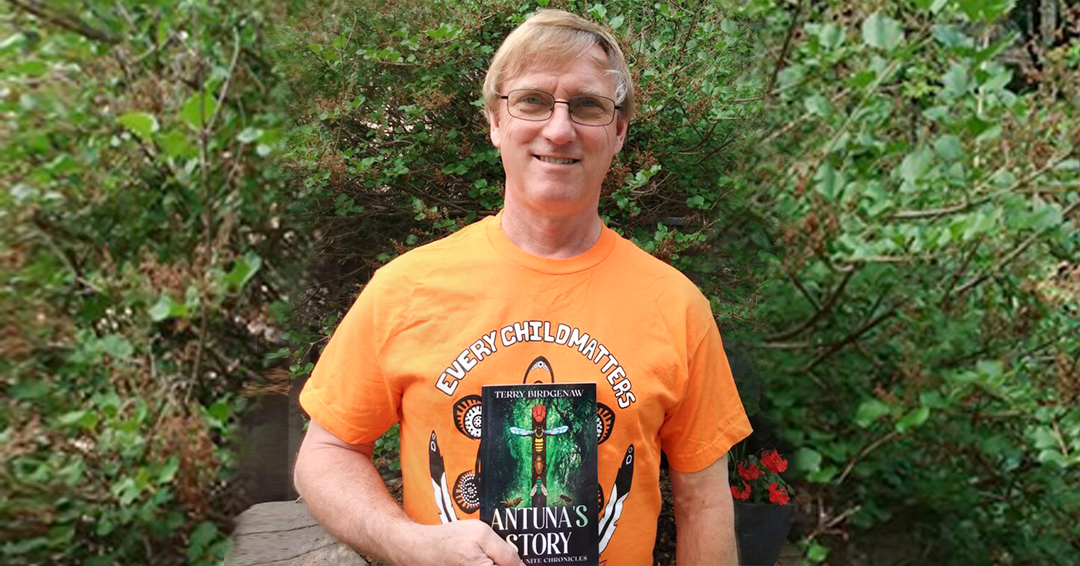 When the COVID-19 lockdowns hit in 2020, many people channeled their unexpected free time into some unlikely hobbies – learning how to bake bread, learning computer programming, or getting around to writing that novel they’ve always wanted to write, but never had the time to.

But Terence Coderre, Professor of Medicine and the Harold Griffith Chair in Anesthesia Research, didn’t just write a novel during his pandemic downtime: he wrote an entire science-fiction trilogy, thanks to perfect storm of motivation and opportunities.

“The idea for this project came to me on a whim and a dare,” he says. “My wife, Ann Birdgenaw, started the second book in her children’s Sci-Fi chapter book series, Black Hole Radio, and was undecided about what type of aliens her heroes would meet. I helped her decide and gave her some ideas about the alien world.”

As she progressed with her book, Coderre continued to give her input, but at one point, she felt the plotlines became too complex for the eight- to 12-year-old readers of the series.

“She then suggested I write a backstory about the planet in a book targeted at young adults and adults,” he said. “I took her up on it and started my fiction writing adventure.”

Coderre, a Métis of Oji-Cree, English, Scottish, Dutch and French-Canadian ancestry, started writing in January 2020, but really got traction a few months later when the University ordered laboratories to shut down for all but mandatory activities.

“Having time on my hands was important because I learned that fiction-writing was a daunting endeavour,” he says. “However, I also discovered that I loved every aspect of it.”

He loved fiction-writing so much, in fact, that one book became three. Coderre’s debut novel, Antuna’s Story, came out on May 16 under the pen name Terry Birdgenaw. The second and third volumes in what Coderre calls The Antunite Chronicles will come out on July 4 and September 21, respectively.

Antuna’s Story is about insects transported from Earth through a wormhole to a far-off planet. Their struggles between aggressive and altruistic tendencies are an allegory for human frailties, where the lust for power and hatred of others leads to widespread prejudice and racism. The novel depicts a draconian ruler who uses deception and oppression to convince his followers to eradicate groups he hates. Young Antuna, an ant heroine, becomes close friends with two bees, a termite, and a spider and encourages ants and other insects to work together to survive under harsh conditions.

Coderre is not a trained entomologist, but he sought to make the story believable – at least on some level.

“To make battle scenes more interesting, my world-building included ants that could spray formic acid (Formica ants), and spiders that spit venom-soaked thread to ensnare their victims (Scytode spitting spiders),” Coderre said. “I also incorporated into one battle scene a shimmering behaviour I learned honeybees used to protect their hives.”

Antuna’s Story won immediate praise. It launched as Amazon’s #1 Hot New Release for Young Adult Science Fiction, and received a Gold Badge recommendation from the website BookView Review, which called it a “charming, engrossing tale set in a vividly realized apocalyptic world” that “will appeal to fans of finely constructed SF stories.”

Two more books by the end of the year

For the upcoming two installments of his trilogy, he researched many more aspects of insect behavior, including how they communicate, cooperate, organize their colonies and even mate – but he still needed a little more help. He enlisted McGill entomology professor Chris Buddle to comment on his manuscript.

“I was pleased that he concluded I’d done my homework well on insect behaviour,” Coderre said. “He mentioned the author ‘accurately depicts insects and their kin – using their traits in a way that is both accurate but also able to stretch the truths in the right way, giving them voices, names, and using their familiar habits as a thread through the novel.’”

The second book of the Antunite Chronicles trilogy, The Rise and Fall of Antocracy, is an Animal Farm-like allegory about failed democracy, where the planet is placed in peril by the leaders ignoring a climate catastrophe. The rulers in the third book, Antunites Unite, create an Orwellian society that uses histrionics, bionics, and socionics to subjugate its citizens. An allegorical dystopian tale like 1984, it depicts a world where freedom-loving spies from the nearby moon infiltrate the colony and start a revolution.

‘Humans must strive for altruistic enlightenment’

All three books highlight the similarities between ants and humans. Through his research, Coderre discovered that despite their vast differences in size and appearance, they share a third of their genes with humans. Like humans, ants work together, and understand the concept of division of labour. Perhaps the most striking similarities between ants and humans are their traits of altruism and aggression. Like humans, ants can be aggressive toward other species, as well as with other ants they consider ‘others’ because they have different genes, smell different, or come from distant nests.

“The main point of this story is timely, with the horrors and atrocities taking place in Ukraine,” Coderre says. “Insects on this planet, like humans on Earth, need to learn how to squelch basic aggressive instincts that drive a lust for power and conquering one’s enemies. Instead, they must strive for altruistic enlightenment that inspires compassion for those like us and those who are different, allowing for inclusiveness as we work towards common goals that elevate all in our world, insect or human.”