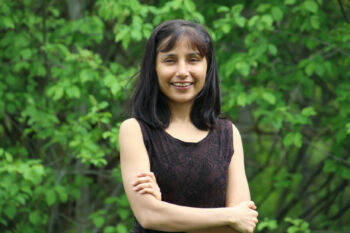 Sheetal Pundir, a rising third-year medical student at McGill University, is the 2020 recipient of the MD Financial Management McGill University Faculty of Medicine Canadian Medical Hall of Fame (CMHF) Award. The award, one of 17 announced by the CMHF on August 27, recognizes second-year medical students with an established track record of community leadership, superior communication skills and demonstrated interest in advancing knowledge. Each recipient receives a $5,000 cash prize and a travel subsidy to attend the 2021 Canadian Medical Hall of Fame induction ceremony in Vancouver, British Columbia, where they will have the opportunity to interact with CMHF laureates and health leaders from across the country.

“I view this award as symbol of growth, an affirmation of just how far my journey has led me and it is a surreal feeling looking back at my humble beginnings,” says Sheetal. “It is still very hard to believe and encourages me to push further in order to ensure I do the award justice. I am extraordinarily grateful for this award, to McGill, to CMHF, to its sponsors and to everyone who has helped me along the way. Coming from a small town in India to here has been quite a journey. In my bags, I packed lots of unknowns, a combo of fear mixed with anticipation, some hopes for new land and some hesitations. The exchange rate for +30⁰ C at that time was -40⁰ C. To leave what you have known wasn’t as scary as to leave whom you have known. Today, I am grateful for that journey and I am grateful for this award.”

Sheetal began her research working with clinician scientists in India looking at infectious diseases. A scholarship followed for work on genetic disorders. She would then receive the Dean’s scholarship upon finishing her PhD at the University of Ottawa where she completed work on cancer biology, with her work on novel anticancer drugs leading to patents and the establishment of Ramsey Lake Pharmaceuticals. Sheetal’s postdoctoral work defined the metabolic traits of healthy and diseased vasculature in proliferative retinopathies and explored new therapeutic interventions with the potential to improve vision.

As a clinical scientist, Sheetal recalls that her supervisors would always bring a different perspective to research, while she was initially more concerned with molecules and graphs.  “They were always thinking about how this data could one day help the patients they work with,” she says. “Their sense of compassion and consideration for the people they meet inspired me to pursue a similar approach. I am very fortunate to have been accepted at McGill as the university is well-known for its research, in addition to its world-class medical program, and has allowed me to pursue my continued interest in research throughout my courses.”

Sheetal has earned numerous awards for her research collaborations on a diverse range of projects including diabetes prevention, health promotion initiatives, assessment of ulcerative colitis disease activity, fetal inflammatory injury prevention, invasive pulmonary aspergillosis diagnosis, and the impact of COVID-19 on vision and mental health. As a spokesperson for AIM for Seva Canada, a nonprofit organization committed to the education of children from rural and remote areas, she performed in a spoken word poetry fundraising tour. Recognized through several national and international public speaking awards, Sheetal spoke at TEDxNickelCity and represented Canada at the World Championship of Public Speaking.

With source files from the Canadian Medical Hall of Fame