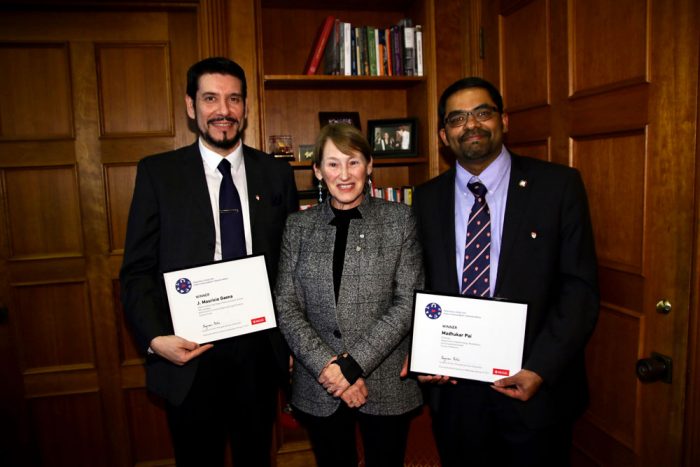 Prof. Madhukar Pai, Director of the McGill International TB Centre and the McGill Global Health Programs; and Mr. J. Mauricio Gaona, a PhD candidate in Faculty of Law, are the winners of this year’s Principal’s Prize for Public Engagement through Media.

Each year, two prizes worth $5,000 each are given out, one to a graduate student or post-doctoral fellow and the other to a member of the academic staff. This year’s competition attracted sixty applicants. Their numbers were evenly divided between academic staff and graduate students; the latter group included both individual applicants and representatives from a number of student groups who are engaged in direct public outreach.

Principal Suzanne Fortier set the tone for yesterday’s event, which was held in her office, by talking about her great joy in seeing so many people in the room who were making it their mission, despite their many commitments and busy lives, to share their knowledge with a public that was avid for information. “In this age of false news and distorted truths, academics have a great responsibility, a challenging responsibility, to share what we know with generosity. I don’t know of anything that is better to give or to receive than learning.”

The jury selected Professor Madhukar Pai, the Director of McGill Global Health Programs and the McGill International TB Centre and a member of the Department of Epidemiology, Biostatistics and Occupational Health, as the winner of this year’s prize for academic staff for his role in helping to focus global attention on tuberculosis, the leading infectious killer of humanity.

Through his many opinion pieces, media interviews, and active presence on social media. He also advocated for the Canadian government to invest more to combat the high TB rates in Inuit communities. In 2018, he was the only academic invited to speak on TB at the United Nations. His work with the World Health Organization was highlighted in the New York Times. Thankfully, the world has committed to end the TB epidemic by 2030.

“I am proud to be at a university that values academic engagement with the media, policy makers and the public at large,” said Professor Pai. “As I grew up in my career, I realized that it was not enough to be an academic and publish a paper. If you want to do something about the issues that are important to you, you have to engage with the media and policy-makers. Even if it’s scary.”

Speaking out on critical issues

The winner of this year’s Principal’s Prize for Public Engagement in the category for graduate students and post-doctoral fellows is José Mauricio Gaona, a PhD candidate in the Faculty of Law, a Vanier Scholar and an O’Brien Fellow at the Centre for Human Rights and Legal Pluralism.

Through media interviews in both English and French, he has contributed to public understanding of some of the most critical challenges of our time: global migration, populism, climate change, and artificial intelligence. An accomplished scholar who is rapidly building a reputation as a public intellectual, he has over 2,000 followers on LinkedIn, where he runs a personal blog. He does podcasts in four languages.

In his speech, Mr. Gaona thanked those who had written letters of support for him. The glowing letters of support came from Mr. Gaona’s supervisor Professor François Crépeau, the Director of the McGill Centre for Human Rights and Legal Pluralism, and the Hans and Tamar Oppenheimer Professor of Public International Law; from Professor Fabien Gélinas, the Sir William C. Macdonald Professor of Law; and from Dean Robert Leckey, the Samuel Gale Chair, who was present for the ceremony. Dean Leckey greeted the announcement of Mr. Gaona’s win with a loud “Bravo” and enthusiastic applause. Mr. Gaona also thanked his brother and mother who were visiting from out of town. The prize-giving ceremony took place on his mother’s birthday.

Sharing with the community – a McGill commitment

This is the competition’s third year, and it is starting to find its feet. The brainchild of Carole Graveline, the former Director of the McGill Media Relations Office, the goal of the Principal’s Prize is to draw attention to the many researchers who actively engage in reaching out to the public and the media to share their knowledge and research, along with the excitement of learning. By doing so, they extend the reach and influence of their scholarship and support McGill’s commitment to engage with the wider community.

The Principal ended the ceremony by proposing a toast to all who share their research and knowledge with media and the public. “I am looking forward to reading about all your work, about the work you do inside academia and the work you do on the outside. I hope many others will follow your lead.”

The jury was impressed by number of groups at McGill engaging directly with public to share knowledge and excitement of learning. Two groups and three individuals attracted special attention this year.