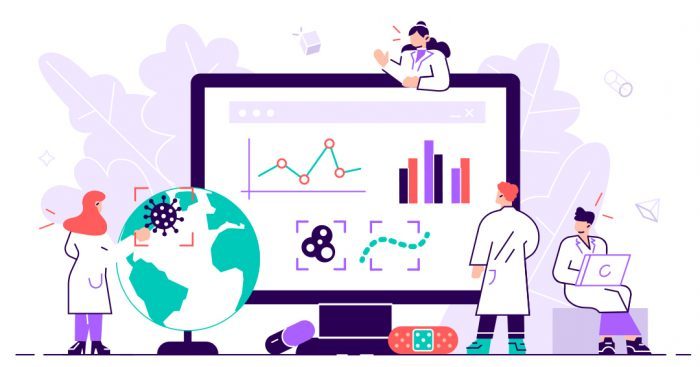 There is no shortage of COVID-19 data available in Quebec – but turning it into what epidemiologists call “epidemic intelligence” that can inform public health decision-making, is no easy task. Reporting has been in an almost constant state of flux since the beginning of the pandemic, with changes in criteria and priorities complicating the analysis. Undaunted, Dr. Mathieu Maheu-Giroux, Assistant Professor in the Department of Epidemiology, Biostatistics and Occupational Health, and several colleagues, with support from the MI4 Emergency COVID-19 Research Funding program, are tackling the problem and building a mathematical model that can use this data to generate predictions about what is to come.

“Our primary objective is to make sense of the surveillance data we have, so we can try to track in near real time what level of transmission we are experiencing and, based on that, what are we likely to experience in the next few days or weeks in terms of cases, hospitalization and mortality,” explains Dr. Maheu-Giroux, whose team was one of 16 selected in the first round of the MI4 funding initiative.

They are also using other measures, including Metro ridership from the Société de transport de Montréal (STM) and Google’s Community Mobility Reports (which uses cellphone tracking to show how often people are visiting places such as shops, parks or staying home), to cross-validate what they are seeing in their modelling in terms of the impact of certain interventions on transmission rates. “So if we see a big decrease in transmission is it because of something secular that happened everywhere or is it a blip in the surveillance data because they changed the reporting system?” says Dr. Maheu-Giroux.

So far, what the modellers are seeing is a mixed bag. “There’s been an important reduction in the virus’ reproductive number as a result of the physical distancing measures,” says Dr. Maheu-Giroux. “But the success has been uneven across the province and there are some highly vulnerable milieux, such as long-term care facilities, which have seen some devastating outbreaks. If we look at the number of deaths, they’re really overrepresented.” Dr. Maheu-Giroux is also troubled by the recent spike in cases among health care workers which could further exacerbate the pressure on the health system.

In the short term, the reduction in levels of transmission has translated, according to the team’s latest data published by INESSS/INSPQ on April 25, into a relative stabilization of new hospital admission across Quebec. They project that over the next four weeks, if this trend continues, hospital admissions could continue to increase in Montreal, Laval, and neighboring regions. Hearteningly, they see an opportunity for a cautious resumption of certain clinical activities in regions where the situation has stabilized.

For more long-term predictions, the team is collaborating with Dr. Marc Brisson’s group at Université Laval, which is focusing on longer range data and what-if scenarios. Dr. Maheu-Giroux ventures to say he’s pretty sure this pandemic isn’t going away anytime soon. He notes that reopening schools and certain sectors of the economy, which the government announced this week, will doubtless lead to an increase in transmission of the virus, but to what extent we don’t know. “If we want to control the outbreak, we need to substitute that decrease in contact with another intervention,” he says. “If there is a lot testing, contact tracing and isolation of cases, maybe it could be sufficient to avoid a major crisis in the health care system.”

Dr. Maheu-Giroux is the first to say that model findings should be interpreted with caution. “In a model you need to be very critical because it’s based on a ton of assumptions. Sometimes it’s based on data that isn’t as robust as we would like,” he says, adding that it’s normal for the data to be imperfect in a crisis such as this. “I hope our findings will be included in the government’s decision-making process, but it’s only one part of the analysis and it doesn’t replace what we call ‘shoe leather epidemiologists’ – those who are on the ground to measure, make direct observations, and do contact tracing.”

Dr. Maheu-Giroux, who in his pre-pandemic life modelled HIV and other infectious diseases such as hepatitis C, decided to embark on COVID-19 research initially to satisfy his own curiosity about the transmission numbers. Even before the MI4 call came out, he was informally working with colleagues on the question. He also felt it was important to pitch in because there are not that many mathematical modellers in Québec working in population health. He is now part of a modelling working group formed by the Public Health Agency of Canada (PHAC) to share COVID-19 data and figure out how to respond to priorities.

Dr. Maheu-Giroux admits that the magnitude of the pandemic has caught him off guard. “We always knew there would be a pandemic at some point,” he says. “But I would be lying if I said I was not surprised by the rapidity with which it spread. Perhaps I was biased because of SARS and MERS, but I thought we would be more successful in containing it in the first place.”