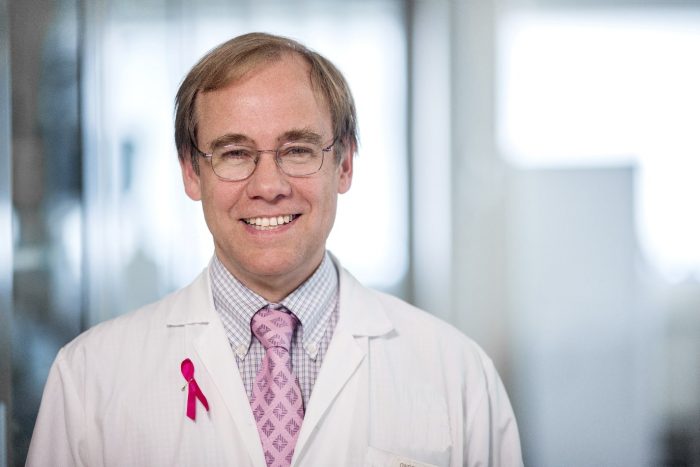 In a radical departure from established treatment protocols, Dr. Mark Basik, a surgical oncologist at Segal Cancer Centre at the Jewish General Hospital (JGH) and senior investigator at the Lady Davis Institute, is leading an international effort that will lead to a clinical trial to forego surgery in breast cancer patients who show no signs of residual cancer following a course of pre-operative chemotherapy.

“Chemotherapy is so effective that, when given before surgery, in many cases, we see tumors shrink to where we can no longer feel anything and it no longer shows up on mammograms or ultrasounds,” explains Dr. Basik, an Associate Professor in the Departments of Surgery and Oncology at McGill University. “Patients often ask: do I still need surgery? Because of lingering doubts of stray malignant cells, we have been compelled to perform surgery to remove tissue for the sake of absolute certainty.

“But, what if,” he goes on, “we could get very strong proof that the disease has been eliminated without operating? We would be able to spare our patients the pain of surgery and the trauma of partial or full mastectomy and reconstruction. We believe that, using a combination of imaging technology and taking needle biopsies of the area where the tumor was located, we will be able to determine with confidence whether the cancer has been eradicated.”

Dr. Basik is the principal investigator on a National Institutes of Health (NIH) National Cancer Institute (NCI) trial that is recruiting 175 patients at 338 sites to test the accuracy of the needle biopsies of the breast to detect stray cancer cells after a complete response to therapy. Participants will receive drugs followed by mammograms, ultrasound, and MRIs, as well as a needle biopsy. If it is found that this approach is able to identify patients who no longer have cancer cells in their breasts with a high degree of certainty, then the next step will be to start a trial in which – if no traces of cancer are found – the patient will not require surgery. The trial is only open to patients with breast cancers that respond very well to existing chemotherapeutic agents. Dr. Basik says that this applies to approximately 20% of those diagnosed with breast cancer.

Following the prescribed course of chemotherapy, patients will undergo scans and a needle biopsy to verify whether the affected area is cancer free. They will then have breast lumpectomy as planned. The trial will determine whether the needle biopsy is sufficiently accurate in determining whether or not there is any remaining cancer so that the idea that surgery may be safely avoided can then be reliably tested in a next clinical trial.

Dr. Basik has been working for close to a decade to gain acceptance from his colleagues, as well as patients, for this novel approach.

“It doesn’t make sense to perform surgery when the tumor has melted like snow on a summer’s day in response to drugs,” he says. “There are those who have convinced themselves that only radical surgery can excise the cancer, but we know this is simply not the case. Our entire thrust has been to reduce the use of radical procedures in favor of those that can be as effective with less pain and loss of tissue.”

The practice of de-escalating medical interventions aims to minimize the invasiveness of treatment. Thus, according to the NCI, in 2015 more than 65% of breast cancer patients over the age of twenty were able to undergo breast-conserving surgeries, while less than 35% had mastectomies. To avoid surgery altogether will be the next evolution in the process. One that Dr. Basik sees as a very promising development for patients.

For media inquiries and to arrange interviews with Dr. Basik, contact: