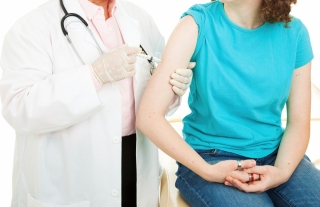 Data from Ontario show early benefits from the human papillomavirus (HPV) vaccine in young girls, according to a new study by researchers at Queen’s University and McGill.

The HPV vaccine, which protects against four types of HPV shown to cause cervical cancer and anogenital warts, is offered free through school-based programs to young girls across Canada. Despite the fact the vaccine is free, vaccine rates are lower than expected in a number of regions, in part because parents perceive their daughter’s level of sexual activity as low at young ages.

“We observed a large and significant reduction in cervical dysplasia, a precursor to cervical cancer, in girls as young as 14-17 years,” say Leah Smith and Linda Lévesque, researchers with the Institute for Clinical Evaluative Sciences (ICES) at Queen’s University.

The study, published in the journal Pediatrics, also found the vaccine is starting to decrease genital warts in this population.

“The fact that these benefits were observed in such a young age group strengthens current recommendations that vaccination should not be delayed,” says Dr. Smith, lead author on the study and a former McGill PhD student.

“Although the vast majority of cases prevented by the vaccine would not have progressed to cervical cancer, given the burden of cervical dysplasia on the emotional and physical well-being of girls as well as on the health-care system, these early reductions are nevertheless of great importance,” says Dr. Lévesque.

Funding for the research was provided by the Canadian Institutes of Health Research, the Institute for Clinical Evaluative Sciences, the Fonds de la Recherche du Québec–Santé, the Canada Research Chairs program, the Canadian Cancer Society Research Institute, and the Canada Foundation for Innovation.