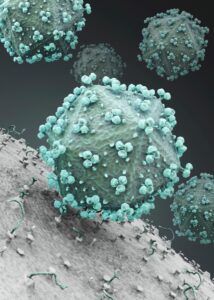 A Canadian research team at the IRCM in Montréal, led by molecular virologist Éric A. Cohen, PhD, made a significant discovery on how HIV escapes the body’s antiviral responses. The team uncovered how an HIV viral protein known as Vpu tricks the immune system by using its own regulatory process to evade the host’s first line of defence. This breakthrough was published yesterday in the scientific journal PLoS Pathogens and will be presented at the upcoming IAS 2015 conference in Vancouver. The findings pave the way for future HIV prevention or cure strategies.

The study’s goal was to determine how HIV manages to compromise antiviral responses in the initial period of infection, also called the acute infection stage, during which the virus establishes itself in the body. The acute infection is considered a critical period in determining the complexity, extent and progression of the disease. It is also during this stage that HIV establishes latent infection in long-lasting cellular reservoirs. These viral reservoirs, which harbour the virus out of sight from the immune system and antiviral drugs, represent the primary barrier to a cure.

“An important component in this process is a group of proteins collectively called type 1 Interferons, which are the immune system’s first line of defence against viral infections and are known to have a beneficial role in the early stages of HIV infection,” says Prof. Cohen, Director of the Human Retrovirology research unit at the IRCM. “The problem is that HIV has developed mechanisms to suppress the Interferon response and, until now, little was known about how this was achieved.”

Most of the Interferon is produced by a very small population of immune cells called pDCs (plasmacytoid dendritic cells), responsible for providing immediate defence against infections. PDCs patrol the body to detect invaders and, when they recognize the presence of a pathogen, they secrete Interferon. The Interferon then triggers a large array of defence mechanisms in nearby cells, creating an antiviral state that prevents the dissemination and, ultimately, the expansion of the virus.

“When pDCs encounter HIV-infected cells, the production of Interferon is regulated by a protein located on the infected cell’s surface called BST2,” explains Mariana Bego, PhD, first author of the study and research associate in Cohen’s laboratory. “BST2 has the ability to bind to and activate a receptor called ILT7, found on the surface of pDCs, which, in turns, sends a signal that suppresses the production of Interferon and halts its defensive functions. Interestingly, BST2 is also responsible for restricting HIV production by trapping the virus at the cell surface before it can exit infected cells and disseminate. However, HIV uses the viral protein Vpu to counteract BST2 antiviral activity.”

“With this study, we uncovered a unique mechanism whereby HIV exploits the regulatory process between BST2 and ILT7 to limit the body’s antiviral response, which allows the virus to spread and leads to persistent infection,” adds Dr. Bego. “We found that HIV, through Vpu, takes advantage of the role played by BST2 by maintaining its ability to activate ILT7 and limit the production of Interferon, all the while counteracting its direct antiviral activity on HIV production.”

“The hope for a definitive cure and an effective vaccine has been frustrated by HIV’s endless propensity to subvert the host’s defences and persist in small populations of long-lasting reservoirs despite antiretroviral therapy,” describes Cohen, who also leads CanCURE, a team of leading Canadian researchers working towards an HIV cure. “Our findings can provide tools to enhance antiviral responses during the early stages of infection. By blocking Vpu’s action, we could prevent early viral expansion and dissemination, while also allowing pDCs to trigger effective antiviral responses. We believe that such interventions during primary infection have the potential to limit the establishment and complexity of viral reservoirs, a condition that seems required to achieve a sustained HIV remission.”

“The discovery by Bego and Cohen, which explains how the virus can’t be held down or wiped out during early periods of infection, will bring us closer to ending HIV/AIDS,” says Robert Reinhard, CanCURE Community Liaison. “By filling an important gap in knowledge, this new study will advance research for an HIV cure.”

The research project was funded by the Canadian Institutes of Health Research (CIHR), the Canadian HIV Cure Enterprise (CanCURE) through a partnership between CIHR, the Canadian Foundation for AIDS Research (CANFAR) and the International AIDS Society (IAS), as well as by a pilot project from the FRQS AIDS and Infectious Disease Network. The study’s authors also include Édouard Côté and Johanne Mercier from the IRCM, as well as Nick Aschman and Winfried Weissenhorn from the Université Grenoble Alpes in France. For more information on the study, please refer to the article published online by PLoS Pathogens:http://journals.plos.org/plospathogens/article?id=10.1371/journal.ppat.1…

Findings from this study will be presented by Dr. Cohen on July 21 at the Vancouver Convention Centre as part of the 8th IAS Conference on HIV Pathogenesis, Treatment and Prevention.

Éric A. Cohen, Director of the Human Retrovirology research unit at the IRCM, is a Canadian molecular virologist known for his ground-breaking work on the function and mechanism of action of HIV accessory proteins. He is also Professor in the Department of Microbiology and Immunology of the Université de Montréal and Adjunct Professor in the Department of Medicine (Division of Experimental Medicine) at McGill University. He obtained a baccalaureate degree in biochemistry from McGill University and a PhD in molecular biology from the Université de Montréal.   Cohen has been active in the field of research on HIV and AIDS for over 25 years. His postdoctoral work (Dana Farber Cancer Institute and Harvard Medical School) led to the discovery of two HIV proteins, Vpu and Vpr (known as accessory proteins), which are required for optimal virus replication. Cohen is very active in the Canadian and Quebec scientific community in the field of HIV/AIDS. He is a founding member of the AIDS and Infectious Disease Network at the Fonds de recherche du Québec – Santé (FRQS), where he currently serves on the Scientific Committee. He is also a member of CIHR’s HIV/AIDS Research Advisory Committee. For more information, visit www.ircm.qc.ca/cohen.