A Q and A with Matthew Tang, postdoctoral researcher 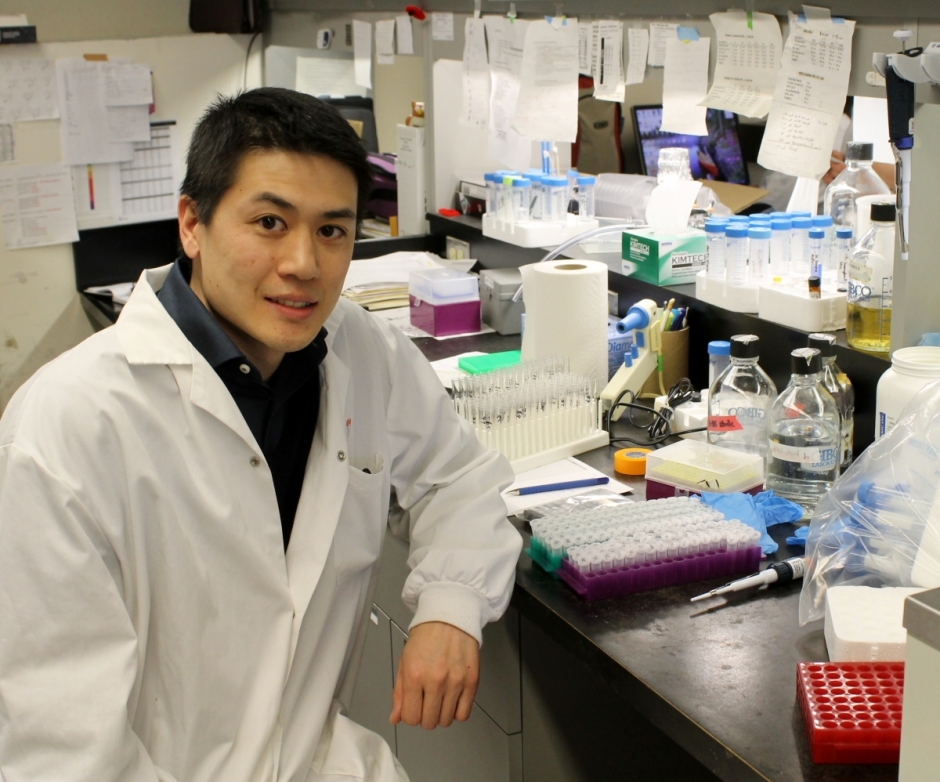 Although the exact cause of Parkinson’s disease (PD) is unknown, scientific research suggests that mutations in genes such as Parkin and PINK1 have a significant role in the progression of PD. These genes are involved in helping to maintain the health of cells, in part through their actions on mitochondria, the part of the cell whose function is to produce energy and to regulate metabolism.

Some of the world’s most important research into the mechanism of Parkinson’s disease is being conducted at McGill University in a collaboration among researchers of the Neurodegenerative Diseases Group of the Montreal Neurological Institute and Hospital (The Neuro), the Department of Pharmacology and Therapeutics, and the Groupe de Recherche Axé sur la Structure des Protéines. In a paper published in the journal Nature Communications, researchers Matthew Y. Tang, Marta Vranas, Andrea I. Krahn, Shayal Pundlik, Jean-François Trempe and Edward A. Fon uncover more about the function of Parkin, a protein that, when dysfunctional, contributes to the development of PD.

Tang, a post-doctoral member of Dr. Fon’s laboratory and the study’s first author, explained how this new knowledge helps to understand PD.

What is Parkin and what is its significance in PD?

Parkin is a protein that has been linked to PD. The majority of Parkin-associated PD cases are caused by loss-of-function mutations that reduce or abolish Parkin’s activity. Parkin plays a key role in a pathway that is responsible for the maintenance and clearance of damaged mitochondria, the energy-producing part of the cell. We’ve been investigating how the Parkin protein functions and how mutations within Parkin affect mitochondrial quality control. Parkin is only one of the proteins linked to PD, but it gives us a clue as to what’s going wrong in the cells of PD patients.

Parkin has many interactions with other proteins in the cell. Your paper highlights the importance of the interaction between PINK1 and Parkin. Why are these interactions important?

Parkin and PINK1 are two proteins that function in a common mitochondrial quality control pathway. When the mitochondria are damaged, PINK1 phosphorylates Ubiquitin and Parkin, and initiates the removal of damaged mitochondria. PINK1’s interaction with Parkin results in Parkin going from an inactive to an active state. So PINK1 is a very important protein that is required to activate Parkin. The shape of the Parkin protein—its conformation—is central to the activation process.

In its native state, Parkin is folded in such a way that it’s very tightly bound and therefore is “turned off.” In closed conformation, Parkin is inactive and unable to perform its function. For Parkin to be activated, it must undergo a conformational change. The focus of our research was to investigate the sequence of events that lead to Parkin being “turned on.”

So there are various factors needed to open Parkin?

What role do Parkin mutations play?

Most Parkin mutations found in PD are associated with a loss of function. In our study, we are interested in the mechanism of how Parkin is activated – how Parkin changes from a “closed” inactive state to a more “open” active conformation. We discovered that introducing mutations within Parkin that result in a more “open” conformation enhances Parkin’s function. This suggests that we might find a molecule that does the same thing—turn on Parkin or enhance its ability to turn on.

How exactly did you and your colleagues do it?

Our experiments were done in cells grown on a dish, or from mitochondria purified from cells. We used molecular biology techniques to introduce mutations in Parkin and study what effect these mutations may have on mitochondrial quality control pathways.

Are there many factors that keep Parkin closed or open?

Parkin is basically inactive because it’s in a very regulated pathway. Parkin is activated under cellular stress. You don’t want it activated all the time! There are many factors that turn Parkin on. For example, when the cell detects mitochondrial damage, Parkin plays a critical role in initiating the removal of dysfunctional mitochondria. If the cell does not have the ability to deal with this damage, reactive oxygen species, which is a toxic by-product, can be released and this can be detrimental to the cell.

More and more evidence suggests that the cause of many neurological diseases seems to be related to mitochondria. Is this true for PD?

Certainly it’s a major focus of PD research. Many of the genes linked to PD are associated with mitochondrial dysfunction. However, it’s not just PD that has problems with mitochondria – more and more neurological disease definitely have a mitochondrial component to the disease.

What possible new therapies are suggested by this research?

Our latest paper is really a proof of principle concept paper. We showed that introducing activating mutations that relax Parkin into an “open” conformation can enhance its function – activated Parkin can remove damaged mitochondria faster. So the idea is if you get this inhibited pathway to be fully functional it may have benefits for patients with PD. The goal is to find a drug that can activate the pathway better and thus give the cell a greater chance to survive. The mechanism by which Parkin is activated is crucial to finding such a drug that would open up Parkin and activate it. What we’re working toward is finding a few compounds or drugs that bind to Parkin and open it.

So how do you do that?

We’ll be developing a screen to test for drugs that could activate Parkin. We’re also interested in looking at mutations that we know are affected in PD patients, and test if these drugs can overcome mutations that cause reduced Parkin activity. We are searching for small molecules that can improve the function of Parkin as a possible therapeutic for PD.