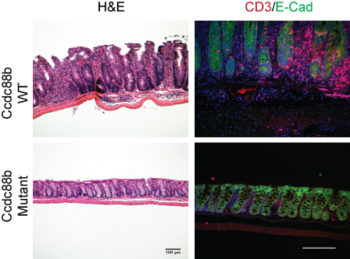 A recent study published in Nature Communications by Drs. Nassima Fodil and Philippe Gros at the McGill University Research Centre on Complex Traits, could have a significant impact on future treatments of Inflammatory Bowel Disease (IBD) – a cluster of ailments that includes Crohn’s disease and Ulcerative colitis and that affects over a quarter million Canadians. The study found a gene, which was previously discovered as critical to sustain inflammation during cerebral malaria, is also important in patients afflicted with IBD.

Through their research, Dr. Gros, Vice-Dean, Life Sciences at McGill University’s Faculty of Medicine, and his team determined that the gene known as CCDC88B plays a prominent role in the function of certain types of immune cells that drive inflammation. In particular, they show that individuals who express a low amount of the gene product and protein in these cells have a lower incidence of IBD compared to those who express more. CCDC88B is one of several genes located on a specific chromosomal segment that had been previously found associated with susceptibility to IBD in humans.

Many anti-inflammatory drugs currently on the market for patients suffering from IBD are not always effective and often cause significant side effects. Demonstrating the importance of CCDC88B in IBD is a first step in considering more targeted intervention strategies around this gene.

“Previous research was only able to identify large segments of the genome as contributing to genetic risk of IBD, while the nature of the causative gene in the 11q13 segment remained unknown. However, our research has pointed at the missing link, identifying the CCDC88B gene as the cause of the genetic effect,” says Dr. Fodil, a Research Associate in Dr. Gros’ lab and the study’s lead author.

Researchers must now look to the mechanics behind the CCDC88B gene and develop a greater understanding of the effects it has on the cellular and molecular level.