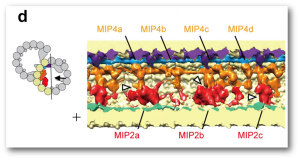 Picture a house. To maintain its structural integrity and stability requires a solid load-bearing frame replete with studs, ceiling joists, rafters, ledger, strut, bridging and so on. Now imagine the cilia as a biological version of a house – microscopic, hair-like structures protruding out of human cells such as flagella in sperm or in our respiratory tracts. As critical as the frame is to our actual house, the microtubule doublet serves as the main support structure in the cilia, which play vital roles in humans. The beating of the cilia help mucociliary clearance in the respiratory tracts and the motility of sperms. Defects in cilia cause cilia-associated diseases including blindness and chronic respiratory diseases.

When you observe a house from a distance you will discern only its main components. With cilia, until recently researchers have only been able to view the microtubule doublet from afar and, as a result, have believed that they are composed mostly of tubulins, the cellular version of a house’s long wooden studs.

Now, using the state-of-the-art Titan Krios microscope, researchers at McGill University’s Faculty of Medicine were able, for the first time, to study the microtubule doublet in great detail. Their findings showed that this structure is much more complex than previously believed and were published recently in Nature Communications.

A more complex system than thought

One example of a disease associated with improperly functioning cilia is primary ciliary dyskinesia (PCD), a genetic disorder that leads to chronic respiratory diseases. While there are some genes known to cause PCD, in many cases the root cause goes unknown. Apart from looking for the known genes, doctors diagnose PCD by looking for defects in the structure of the cilia of patients using low-resolution electron microscopy, which provides conclusive evidence in only 50% of cases. “A lot of the extra proteins that we observed in our microtubule doublets are candidates for PCD,” says Dr. Bui.  “So, our study may lead us to identify more PCD-related genes, which can help make diagnosis more complete. Additionally, if we know how these extra proteins influence the stability of the microtubule doublet, it could allow us to develop drugs to compensate for the destabilizing effects.”

Getting a closer look at cilia

If we return to our analogy of the house, it is hard to accurately understand the structural details by taking pictures of the inside and outside. We need to remove the drywall and everything else leaving only the frame to truly analyze its structure. “In the same way, by purifying the microtubule doublet, we can really look at it in more detail and understand its architecture and composition,” explains Dr. Bui. “We can study the microtubule doublet, or frames, more carefully now and better understand what kind of components it has and how they come together.  This is important because it gets us closer to understanding the architecture of the microtubule doublet and the stability provided by its specific construction.”

Having made great progress in identifying these new proteins, many questions remain for Dr. Bui and his colleagues. “We want to find out the identity of all the microtubule inner proteins that we saw,” he says. “We also need to understand exactly how those proteins influence the stability of the microtubule doublet. Furthermore, if we found out that a few out of those proteins are extremely important for the function of the cilia, we will also want to look for diseases in human that might be due to the defects of those proteins and potential ways to overcome the impacts.”

This research was funded by the Canada Research Chair Tier 2 in Cryo-Electron Tomography as well as an NSERC Discovery Grant and was conducted in collaboration with Dr. Panagiotis Kastritis from the European Molecular Biology Laboratory for structure modelling.
The article, “Subnanometre-resolution structure of the doublet microtubule reveals new classes of microtubule-associated proteins” was published in Nature Communications on May 2, 2017.
DOI:10.1038/ncomms15035