McGill’s Nahum Sonenberg has established a new paradigm for understanding and treating human disease by discovering how errors in RNA translation lead to cancer, autism, depression and memory disorders. 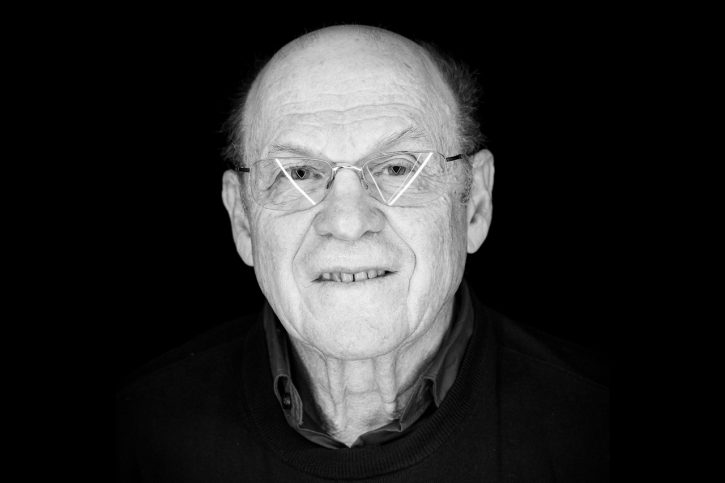 As a boy in Jaffa, Israel, Nahum Sonenberg walked regularly with his father to the Old Protestant cemetery on a hill overlooking the harbour. His father showed him the gravestone of Thomas Hodgkin, the British pathologist who first described Hodgkin’s lymphoma in the 1800s. Sonenberg recalls them standing on the hilltop, looking over the Mediterranean: “I asked my father, what’s beyond the water? ‘That’s America,’ he said, ‘where everything is possible.’ I was only four and thought I should go there one day.”

Born in 1946 in a displaced persons camp in Germany to Jewish parents who had fled to Russia from Poland, Sonenberg was raised and educated in Israel, at a time when polio was a major threat to global health. The frequent epidemics of the deadly disease left a vivid, lasting impression.

“I recall hearing about hospitals full of children with polio in big iron lung machines,” says Sonenberg, the Gilman Cheney Chair in Biochemistry in McGill’s Faculty of Medicine. “When I was 10, I learned President Roosevelt had been crippled by polio. The disease doesn’t distinguish between rich and poor, or powerful and weak, and I felt something must be done.”

Today, Sonenberg – although perhaps less well known than Hodgkin – is a scientist recognized for a string of discoveries showing how errors in translating the genetic code into proteins can reveal key clues to combating cancer and other devastating diseases. His simple and understated manner belies a brilliant clarity of purpose and relentless ambition to move scientific mountains one boulder at a time. “In science, if you work hard enough and use your intelligence, you can make a lot of progress,” he summarizes.

A leap of progress

Prophetically, Sonenberg made his first major scientific discovery after going to America, the promised land of possibilities, to undertake post-doctoral research at the Roche Institute of Molecular Biology in New Jersey. In 1976, he uncovered a critical molecule and cellular control “knob” – known as eIF4E (eukaryotic translation initiation factor 4E) – that translates genetic code into proteins, the major building blocks of cells in all organisms.

The discovery of eIF4E proved to be a major turning point in his career. “That was one of the best experiments I did in my life and it turned out to be important for many diseases,” he says.

After joining McGill’s biochemistry department in 1979, Sonenberg began to ask what happens when something goes awry with eIF4E and the intricate molecular machinery that regulates protein production in cells. Over four decades, he’s made breathtaking discoveries showing how specific errors and experimental alterations in translation control – abnormal regulation of protein synthesis – can lead to cancer, autism, memory diseases, sleep disorders and depression. He and his many collaborators from diverse disciplines have systematically identified novel drug targets and translated these findings into promising new approaches to treat often incurable diseases.

The fruitful, far-reaching impact of his pioneering research in translation control has been recognized through many awards including the Gairdner Foundation International Award, Wolf Prize in Medicine, Robert L. Noble Prize from the National Cancer Institute of Canada, Killam Prize for Health Sciences, Prix du Québec Wilder-Penfield prize for biomedical research, and others. In addition to these accolades, his discoveries have led to promising new approaches or innovative applications to treat many different types of cancer, memory diseases, traumatic brain injury, autism-related disorders, and depression.

A sense of wonder

As a scientist, Sonenberg displays an unusual willingness to rigorously test fresh ideas in fields that go well beyond his own, but which connect in surprising ways to his expertise. “You can’t divorce the personality from the science,” says Dr. Abe Fuks, former Dean of the McGill Faculty of Medicine and professor in experimental medicine. “Nahum has this gift of openness and happily collaborating with anyone who’s interested in new ideas.”

Sonenberg grew up in the heady early days of the microbiology revolution after James Watson and Frances Crick discovered the double helix biochemical structure of DNA in 1953. To him, science offered an exciting path to a world of endless possibilities. “Almost every child is very curious. You want to know answers to everything and get excited about finding answers to problems. You want to make the world better and cure all diseases,” he says. “Theoretically, it could be done. It just hasn’t been done yet.”

As a microbiology student at Tel Aviv University, Sonenberg marvelled at how American biochemist Marshall Nirenberg deciphered the genetic code in the 1960s. Nirenberg had showed how messenger RNA deciphers DNA letters to encode each of the 20 amino acids used to synthesize proteins. The next challenge was to learn how proteins are synthesized to match the genetic instructions encoded within mRNA – a process known as translation – and how this translation is controlled.

As a PhD student at Israel’s Weizmann Institute, his curiosity was stirred when Roche Institute biochemist Aaron Shatkin found that the mRNA in eukaryotic cells (cells in complex organisms with a nucleus) has a cap-like structure involved in activating protein synthesis. Sonenberg joined Shatkin’s lab as a post-doctoral fellow, seeking an unidentified protein that interacts with the cap.

“I tried a standard cross-linking technique, but it didn’t work. Dr. Shatkin said there was this fantastic chemist at Columbia – Charles Cantor – who could help us. He instantly told us to use a more powerful stabilizing agent and it worked like a charm,” recalls Sonenberg, who modified the experiment and identified a specific protein that recognizes and binds to the cap: this was his first encounter with eIF4E.

This initial breakthrough opened the door to wondrous scientific possibilities. Sonenberg found that the cap-binding protein plays a vital role in initiating and controlling translation under normal conditions and in disease. He then applied to McGill University. “I knew researchers here working on the cap,” explains Sonenberg. “McGill was known as a very prestigious university, so it was very appealing.”

At McGill, Sonenberg searched for possible connections between protein synthesis and polio. Although Jonas Salk and Albert Sabin had developed vaccines, scientists did not understand how the virus causes the polio disease. After Nobel Prize winner David Baltimore, and independently Eckard Wimmer at Stony Brook, New York, discovered that poliovirus RNA lacks a cap structure, Sonenberg wondered about this clue. In 1985, he took a sabbatical leave in Baltimore’s lab in Cambridge, Massachusetts, to determine the mechanism through which poliovirus translates its mRNA into viral proteins and triggers disease. “Baltimore said, ‘You have this great idea and should put a lot of effort into understanding the translation mechanism.’ He encouraged me to go for it!”

In 1988, Sonenberg with his student, Jerry Pelletier reported in Nature they had found the poliovirus mechanism: an mRNA site called IRES (Internal Ribosome Entry Site) which recruits the ribosome (a complex molecule that is the site of protein synthesis) to synthesize viral proteins. Poliovirus exploits this unique translation mode to wreak havoc with cellular protein production by shutting off normal protein synthesis in infected host cells, which causes them to die. Before causing cell death, it hijacks the infected cells’ protein-synthesis machinery to make more viral proteins and spread the virus.

Those findings are having an impact on flu treatment today. With influenza, the virus hijacks the infected cell’s protein-production machinery by “snatching” their RNA cap structure to make viral proteins. In 2018, the FDA approved an innovative drug, Xofluza, which combats many different flu strains by inhibiting a “cap-snatching” molecule.

Surprised by an unorthodox oncogene

After demonstrating that an impairment in translation – by deactivating eIF4E – led to devastating polio disease, Sonenberg was curious to see how abnormal levels might affect growth of normal cells: “Every important discovery gives you more confidence and you want to find the next answer,” he explains.

In 1982, MIT scientist Robert Weinberg had discovered the first human cancer-causing gene, the ras oncogene. In 1990, Sonenberg and his team ran an experiment suggesting an increase in eIF4E transformed healthy mouse fibroblast cells into cancer cells. Further experiments showed eIF4E displayed the properties of an oncogene, causing normal cells to become malignant, proliferate and form tumours. Sonenberg shared these exciting results with Weinberg, who was visiting his McGill lab: “Bob was skeptical at first and rightly so. Oncogenes are usually signalling molecules, and this was an unorthodox oncogene. The discovery was so surprising Nature took it.”

In 1994 Sonenberg, together with post-doctoral fellow Arnim Pause, discovered a family of translation control proteins, called 4E-BPs (eIF4E-binding proteins), that bind to eIF4E, which inhibit translation and cell growth. He reported that 4E-BPs are tumour suppressor genes, regulating eIF4E activity to safeguard against cancer. This research has led to new cancer treatment strategies. For example, he is a scientific advisor for San Diego-based eFFECTOR Therapeutics, which has developed a new class of eIF4E inhibitors to treat different types of cancer.

Between 20% and 30% of women diagnosed with early-stage breast cancer develop metastatic disease. Sonenberg and oncologist Dr. Michael Pollak are co-leading a national clinical trial – a Stand Up to Cancer Canada initiative, with up to $6-million in funding – to test one of these new drugs in patients with metastatic breast cancer. “The translation mechanism is a very attractive target for new cancer treatments today,” he says.

Sonenberg made the unorthodox leap from polio and cancer to mental health by doggedly tracking the eIF4E molecule wherever its trail took him. He and his team revealed in successive discoveries that too much eIF4E in the brain causes autistic behaviours, while too little leads to depression. Sonenberg also discovered that alterations in eIF2– another protein initiation factor – impairs memory.

These revelations may lead to new treatment options. He and Peter Walter, a University of San Francisco biochemist, showed that a molecule called ISRIB (Integrated Stress Response Inhibitor) improves memory in mice by reactivating eIF2. It has been licensed to Calico — a company owned by none other than internet giant Google — to develop potential drug treatments for neurodegenerative diseases and traumatic brain injury.

Sonenberg is a pioneer in translation control, with a nose for discovery. “The story of Nahum’s research is that by mining a valuable discovery and digging deeply, the impact spreads broadly too, and the ramifications take you everywhere,” says Fuks.

He has established a new paradigm for understanding basic mechanisms of disease, giving scientists a different lens through which to find promising pathways to possible cures. “Sonenberg is a master at using molecular biology tools to pursue hypotheses developed in his mind and figuring out rigorous experiments to test them,” says John Bergeron, Emeritus Professor of Anatomy and Cell Biology, and Professor of Medicine at McGill. “His discoveries have transformed biology.”

As Sonenberg pursues each new lead in translation control and its potential application to another human malady, he taps into the boyish sense of wonder that still drives him at age 73: “What keeps me excited is investigating ideas that are original, which can lead to a better understanding of the science. You do science, step on something important and you grab it! I could make a mark on the world just by discovering eIF4E and continuing to bring new knowledge that will benefit humanity.”