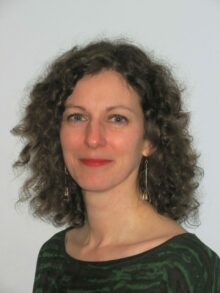 Erica Moodie, William Dawson Scholar and Professor in the McGill University Faculty of Medicine’s Department of Epidemiology, Biostatistics and Occupational Health has been selected as the 2020 recipient of the CRM-SSC Prize in Statistics. The prize is awarded annually by the Centre de recherches mathématiques (CRM) and the Statistical Society of Canada (SSC) in recognition of outstanding research carried out primarily in Canada by a statistician during the first fifteen years after completing a PhD.

“It is a huge honour to be chosen for this award and follow in the footsteps of people I admire including, most recently, another McGillian and friend, Johanna Neslehova (Department of Mathematics and Statistics),” says Erica. “Since the announcement, I have received kind emails from statisticians across Canada; It reminds me that I am part of a really nice community. I just wish that I could share this recognition with some of my research colleagues and students. Statistics is a highly collaborative field, and I get to work with incredibly smart, creative people.”

In her thesis, written under the supervision of Thomas Richardson, Erica studied inference for optimal dynamic treatment regimes (DTR). DTRs are sequential decision-making strategies that define rules for optimal allocation of resources. Over the past 15 years, Erica has established herself as a world expert in this area. With two books and over 130 peer-reviewed research papers to date, she has become one of the most prominent biostatisticians of her generation. Her papers have appeared in Biometrics, Biometrika, JASA, Statistics in Medicine and many other top-tier international journals.

Through her research, Erica has made a fundamental shift in the way that DTR estimators are used and viewed. Many traditional approaches to DTR estimation are opaque. In a series of papers on this topic, she has proposed a new form of regression-based estimation which ensures interpretability and accessibility to end-users in a broad range of fields. This work, beginning with postdoctoral researcher Michael Wallace (now at Waterloo) and continued with several other trainees, includes a suite of model selection, diagnostic, and validation tools, which were notably absent in nearly all alternative methods. Her approach, implemented in R, has raised the bar for all subsequent DTR analyses.

Today, Erica’s work lies at the heart of DTR research. In 2013, she coauthored with Bibhas Chakraborty the first textbook on statistical aspects of DTRs. This bestseller, published by Springer, was followed in 2016 by an authoritative collection of works describing the current tools available to implement DTR analysis, which Erica co-edited with Michael Kosorok.

In contributions to epidemiology with her colleagues Marina Klein, Joe Cox, and numerous PhD students, Erica has also applied causal inference techniques to investigate questions relating to a number of questions, including the interplay between food insecurity and depression, and determining individual- and community-level factors associated with prescription and illicit drug use in an HIV-HCV coinfected population. In total, Erica has supervised 15 MSc and 18 PhD students, as well as 7 postdoctoral fellows.

Erica has demonstrated exceptional leadership at the national and international level. She is an Associate Editor for Biometrics since 2013 and served in the same capacity for JASA – Theory & Methods (2014-2019). Moreover, she was the Scientific Program Chair of the 2017 SSC Annual Meeting, and she was an Associate Director of CANSSI. She was also co-chair of the Causal Inference group in the STRATOS initiative of the International Society for Clinical Biostatistics.

In recognition of her contributions, Erica was listed as one of the top 50 researchers worldwide in causal inference (The American Statistician, 2017) and she won the McGill Principal’s Prize for Outstanding Emerging Researchers in 2018. She became an elected member of the International Statistical Institute in 2015 and was a recipient of Excellence in Mentoring Awards by her department in 2017 and 2019. She is grateful to her husband and two boys for laughter, support, and keeping her active.