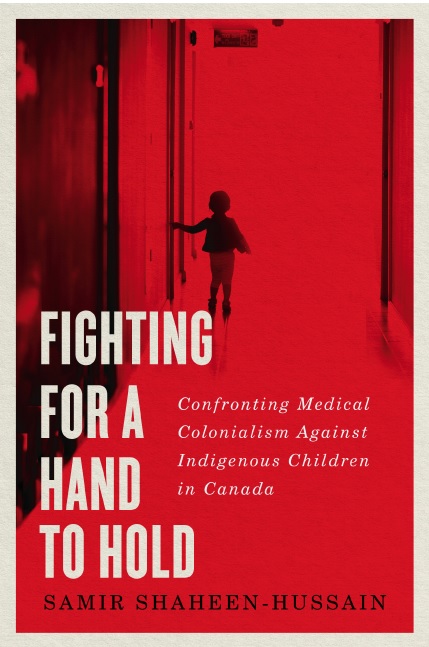 “It had always been upsetting to see children sent alone, but the experiences of two Inuit children in the summer of 2017 haunted me,” says Dr. Samir Shaheen-Hussain, an Assistant Professor in the Department of Pediatrics at McGill University and an Emergency Department physician at the Montreal Children’s Hospital, speaking about the practice of children being transferred unaccompanied by Évacuations aéromédicales du Québec (ÉVAQ). “I don’t know why it took me so long to meaningfully question the normalization of the non-accompaniment practice because inflicting avoidable emotional and psychological trauma on children should never be normal.”

The first of the two cases to which Dr. Shaheen-Hussain refers involved a preschooler who fell off a moving all-terrain vehicle and was transferred to the Montreal Children’s Hospital alone from Nunavik with a suspicion of injuries to the abdomen and head, he explains. “Verbal communication with the child was limited because he spoke exclusively Inuktitut; none of us spoke the language and no interpreter was readily available. Our assessment was limited without a caregiver at the bedside. At one point, despite appearing clinically stable, he started crying. When an Inuktikut interpreter arrived, we finally understood why the child was crying: he was terrified and missed his mother. She had been forced to take a commercial flight to join him because she’d been prevented from accompanying him. It was heartbreaking.”

A few weeks later, a young school-aged child was transferred alone from Nunavik while Dr. Shaheen-Hussain was working in the Emergency Department. The child had swallowed a coin that got lodged in her esophagus, which required removal in the operating room. “Without a caregiver around, I couldn’t get reliable answers to some of my questions from the chart sent with her,” he recalls. “Obtaining informed consent for the procedure from a parent or guardian became a challenge. She was not making a sound, but tears were quietly rolling down her cheeks. On top of the discomfort of having a coin stuck in her esophagus, I could only imagine how scared she must have been, especially without having a loved one’s hand to hold. It was, yet again, heartbreaking.”

The two incidents shared by Dr. Shaheen-Hussain were reminiscent of many others he had seen over the previous decade, first as a pediatric resident and then as a staff pediatrician, and they led him ultimately to question why practices of separating children from their loved ones continued to exist. “Historically, as exemplified by the Indian Residential School System, the best interests of the child had always been used to justify forced removals from Indigenous families and communities, but government promises to safeguard the well-being of Indigenous children were consistently broken,” he says. “If my main concerns as a pediatrician are supposed to be the health and well-being of all children, why hadn’t I properly considered the scope of the intergenerational trauma that came with the non-accompaniment practice sooner?”

Previous appeals for change, which dated back to the 1990s, proved unfruitful, so Dr. Shaheen-Hussain, along with a group of colleagues (including nurses, residents, etc.), decided to launch their own campaign in 2018, determined to see the non-accompaniment rule come to an end. “Without knowing it or intending it – and although there will never be any justification to much of their emotional and psychological suffering – those two children became the catalysts for what would eventually become the #aHand2Hold campaign.”

The campaign, which garnered extensive media coverage and included Dr. Shaheen-Hussain twice being called on to provide expert testimony before the province’s Viens Commission to contextualize the ÉVAQ’s non-accompaniment rule historically and politically, was ultimately successful.

Dr. Shaheen-Hussain notes that the eventual implementation of an actual accompaniment policy and the impact it had was unequivocally positive. “This is very clearly reflected in comments shared by Eeyou and Inuit families who are now almost systematically allowed to accompany their children during medevac airlifts by flying hospital. Parents and caregivers can now comfort their sick or injured child, and also play the important role of advocate, especially for the younger children who often don’t speak English or French. Healthcare providers who work in northern communities have expressed that the accompaniment framework was long overdue and has improved the care that these children receive. ÉVAQ also recognizes that this was the right thing to do; I’ve been told that these pediatric medevac transfers often go smoother because the child has a loved one’s hand to hold during transport.”

Leveraging the experience to educate others and impact further change

Now, in a new book written by Dr. Shaheen-Hussain, titled Fighting for a Hand to Hold: Confronting Medical Colonialism against Indigenous Children in Canada, and published September 23 by McGill-Queen’s University Press, the campaign serves as a focal point to discuss not only the change that came from it, but also the additional work necessary to ensure equitable health care is accessible to Indigenous populations.

“The #aHand2Hold campaign was admittedly marginal when considering the work that needs to be done to ensure that Indigenous Peoples have meaningful access to equitable and dignified health care,” explains Dr. Shaheen-Hussain. “However, the story of the campaign fits into a much larger narrative. By dissecting the provincial government’s response to long-standing calls to end the non-accompaniment practice, the book allows us to understand how colonialism and systemic anti-Indigenous racism operate at a societal level. It also leaves us with a fundamental question: If governments can’t treat Indigenous children equitably and with dignity when it comes to health care, how will they redress the injustices imposed on Indigenous communities more broadly?”

While the story, contextual history and messages within the book could be of interest to a wide audience, Dr. Shaheen-Hussain primarily hopes to engage healthcare trainees and students. Medical historian Maureen Lux, who is also the Chair of the History Department at Brock University, has written that the book provides “an unflinching analysis that should be required reading in every medical school in the country.”

“I’m very much looking forward to discussing the book with healthcare students and trainees because they have the power to meaningfully change healthcare education and clinical provision in the coming years,” notes Dr. Shaheen-Hussain, who has already been invited to speak in virtual classrooms with both CEGEP and university students, and to lead an online workshop with medical students from across the country as part of the Canadian Federation of Medical Students’ “Longitudinal Advocacy Training Series”. “The book can play an important role in exposing and confronting historical and contemporary forms of medical colonialism and anti-Indigenous systemic racism by putting an end to the medical culture that enables them. It can also help healthcare trainees and practitioners understand why some communities are so apprehensive and skeptical about the dominant medical system. Decolonizing healthcare by prioritizing the health, well-being, dignity, and lives of Indigenous children and their communities can ultimately allow medicine to aspire toward the benevolent reputation it holds so dear.”

Fighting for a Hand to Hold: Confronting Medical Colonialism against Indigenous Children in Canada, written by Dr. Samir Shaheen-Hussain, and published by McGill-Queen’s University Press is available at major book sellers, or here.