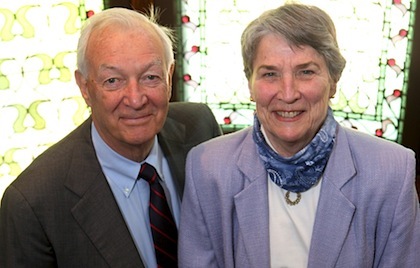 Drs. Sylvia and Richard Cruess have been selected as the 2018 recipients of the Abraham Flexner Award for Distinguished Service to Medical Education, given by the Association of American Medical Colleges (AAMC). The award, the AAMC’s most prestigious honour, was established in 1958 to recognize extraordinary individual contributions to medical schools and to the medical education community as a whole. The duo will be honoured during a ceremony to be held in Austin, Texas during the AAMC’s annual meeting in early November.

“We are obviously very pleased at having been given the Flexner award for 2018,” note the Cruess’ of this most recent recognition of the extraordinary contribution and impact the two have made to medical education over the course of their storied careers. “While many recipients deserve their awards because of their individual efforts, this one is different. It really does recognize the collective efforts of a large number of people within the Faculty of Medicine at McGill. We are being recognized for our contributions to the common understanding of the nature of medical professionalism and how best to teach and assess it. What we have accomplished could not have been done by one or two individuals. It required the total support of a succession of Undergraduate and Postgraduate Deans and a host of individuals within McGill’s community. Therefore while we will receive the honour with great joy, we must insist that everyone understand the seminal role that McGill’s Faculty of Medicine has played in the evolution of the professionalism movement in medicine during the two decades.”

In a collaboration spanning three decades, Sylvia R. Cruess, MD, and Richard L. Cruess, MD, have singlehandedly changed medicine’s understanding of professionalism and the role of the physician in the 21st century. “To be a [medical] professional is not a right but a privilege with a long history and tradition of healing and service,” they wrote in the British Medical Journal.

And indeed, Drs. Cruess’ respective careers in medicine and medical education at McGill University have epitomized the highest ideals of professionalism. At the heart of their teachings has been that professionalism is the basis of the social contract between medicine and society, with expectations and demands on both sides. They have demonstrated that professional identity formation requires appropriate teaching and assessment for both learners and faculty, who must model the ideals of professionalism. As a result, Drs. Cruess developed associated content and assessment tools that have been used across the continuum at McGill and around the world.

Desiring to enhance the professionalism of medicine worldwide, they have shared their work broadly through more than 100 publications and 200 presentations in more than 70 countries. Drs. Cruess were also key contributors to the International Charter of Professionalism and the CanMEDS framework, which have both had significant global influence.

David Eidelman, MDCM, vice-principal (health affairs) and dean of the Faculty of Medicine at McGill University, calls Drs. Cruess’ impact “extraordinary.” He notes that their work has resulted in enhancements to the McGill curriculum as well as in extensive interest from professional associations internationally, including the Canadian Medical Association and the American Medical Association (AMA).

For their contributions, Drs. Cruess have received some of medicine’s most prestigious awards, including the Ian Hart Award of the Canadian Association of Medical Education, the Association for the Study of Medical Education Gold Medal, the Order of Canada, the Commander of Merit of the Knights of Malta, and the Queen Elizabeth II Jubilee Medal. McGill endowed the Richard and Sylvia Cruess Chair in Medical Education in August 2010 and awarded them the Lifetime Achievement Award for Leadership in Learning in 2016.

In summarizing the Cruess’ contributions in the past three decades, Frederic W. Hafferty, PhD, professor of medical education at Mayo Clinic, notes, “There is virtually no aspect of medicine’s modern-day professionalism movement they have not led.”

Drs. Cruess’ outstanding contributions to professionalism and professional identity formation in medicine began during a sabbatical in 1995, following what were already robust and significant careers as administrators and educators in academic medicine.

Sylvia, an endocrinologist, served as director of the Metabolic Day Centre and as Vice President (Medical) of the Royal Victoria Hospital (RVH) in Montreal. She is professor of medicine at McGill and an Officer of the Order of Canada. Sylvia graduated from Vassar College and earned her MD from Columbia University College of Physicians and Surgeons (CUCPS). She completed residency at the RVH and fellowships at the RVH and Bellevue Medical Center at New York University.

Richard, an orthopedic surgeon, held multiple leadership positions at McGill, including as chairman of the Division of Orthopaedic Surgery and dean of the Faculty of Medicine for 14 years. He has been named a Companion of the Order of Canada and an officer of l’Ordre national du Québec and is professor of orthopedic surgery at McGill. Richard graduated from Princeton University and earned his MD from CUCPS. He completed residencies at the RVH and at New York Orthopedic Hospital, Columbia Presbyterian Medical Center.