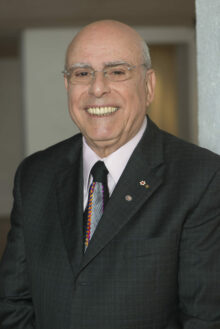 Dr. Phil Gold, a Professor Emeritus in the Department of Physiology, a praise-worthy physician and a leader in research on the physiology of the immune system, is the 2013 recipient of the Prix du Québec – Wilder Penfield. Dr. Gold’s career spans five decades and is marked by major contributions in the areas of immunology, starting with the discovery of the first clinically-useful human tumour marker used in the management of cancer. He has been an instrumental force in developing the field of cancer research at McGill, including his role in establishing the renowned Rosalind and Morris Goodman Cancer Research Centre.
The most prestigious award handed out by the Government of Quebec, the Prix du Québec honour individuals in the areas of culture and science who have made major contributions within their respective fields. Since 1977, these awards are bestowed upon 13 individuals annually – six in the cultural field and five in the scientific field. Awardees have contributed significantly to the advancement of Quebec society and its influence around the world.
For more information about the Prix du Québec, click here.
For a list of current and past Prix du Québec recipients, click here (in French only).