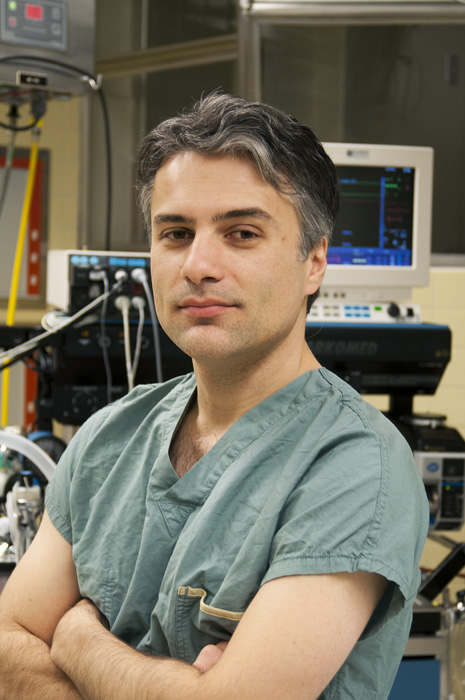 In a field with few silver bullets, Dr. Kevin Petrecca has gotten pretty good at finding silver linings. The neurosurgeon and researcher at the Montreal Neurological Institute and Hospital and Associate Professor of Neurology and Neurosurgery at McGill University specializes in glioblastoma, an aggressive brain cancer with a dismal survival rate.

One silver lining is that because brain cancers are not that common, Dr. Petrecca sees a relatively small number of new patients each week and so is able to forge unusually close relationships with them and their families. “You follow them very closely and you get to know each other,” he says. “I know them and their families and what they’re about, and they know me and what I do.”

Out of this closeness, something extraordinary has emerged. A cluster of about four families of Dr. Petrecca’s patients, upon learning about the emerging therapies and technologies for glioblastomas, decided to get together and plan an event to raise money for brain cancer research. Since it began in 2014, A Brilliant Night, as the fundraiser is called, has raised $1.6 million for the Neuro’s brain cancer research labs. “It’s an amazing thing because these people dedicate tremendous amounts of time, all volunteer,” he says, “and the network expands and expands.”

Even as the event grows, that family-like closeness and exchange of ideas that originally inspired it remains. “That’s what’s pretty special about the A Brilliant Night community,” says Dr. Petrecca. “We’re not just putting money into a black hole. Our people know exactly what we’re doing.” The gala, which will be held this year on October 18, is centred on sharing that knowledge and passion – in an interactive, immersive way, with videos, installations, visuals, and animations, combined with good food and a dose of glamour.

Dr. Petrecca explains that glioblastomas are extremely resistant to conventional cancer treatments. “Surgery is actually the most effective treatment for brain cancer, we use it in combination with radiation and chemotherapy,” he says. But still recurrence at six months is the norm, and most patients don’t survive beyond 14 months after diagnosis. “That’s pretty bad, when you think about most other cancer types,” says Dr. Petrecca. “But if you could remove almost all of the cancer cells patients would live much longer – cancer recurrence in three to five years instead of six months.”

With that goal in mind, Dr. Petrecca has been developing, with Frédéric Leblond, Assistant Professor of Engineering Physics at École Polytechnique, a laser probe that can pinpoint insidious cancer cells during surgery. “The results are incredible,” says Dr. Petrecca. “In one-tenth of a second, we can answer the question of whether there are cancer cells in that area of the brain, with a 97% sensitivity and specificity. The device is more sensitive than MRI – it can detect cancer in areas where the MRI shows only normal brain.” This means that neurosurgeons can remove more of those cells, and hopefully prolong survival.

Dr. Petrecca and Dr. Leblond were named La Presse‘s Personalities of the year in Science in 2015 for the discovery. The device has been spun off into a company and is currently in clinical trials involving 80 patients at the Neuro and is being expedited for FDA approval.

In his other lab, Dr. Petrecca and his team are targeting the cancer stem cells that cause glioblastoma. Stem cells grow very slowly and seem to be resistant to the onslaught of radiation and chemotherapies. They continue to produce cancerous cells post-treatment, hence the high recurrence rate in glioblastoma. Dr. Petrecca’s group is on the verge of a breakthrough as they work towards identifying the origin of the cancer stem cells that give rise to glioblastomas, which he is hopeful will eventually lead to more targeted treatments.

Despite these promising developments, the soft-spoken brain surgeon admits that his patients’ bleak prognoses can take their toll. But even here, he finds a silver lining. “Just because we can’t cure people doesn’t mean we can’t help them to live longer, to live better, to live with dignity and quality – and we can achieve that almost every time,” he says quietly. “That’s how we get through what we get through.”

For Dr. Petrecca, who is originally from Niagara Falls, his family – wife Myriam Douville and their three kids – Sarah, 18, Élodie, 16, and Loic, almost 10 – is by far the best medicine. “I’m a dad with three active kids and that occupies pretty much every moment when I’m not here doing surgery or taking care of patients or in the lab,” he says. “And they’re fun, so it’s not like it’s all one way.”