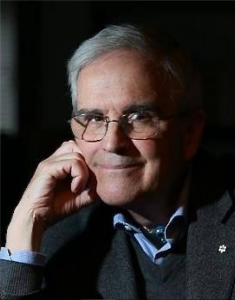 Dr. Balfour Mount was among the six new inductees to the Canadian Medical Hall of Fame, announced on October 3.  These Canadian and international leaders will celebrate this important recognition at a ceremony held in association with Schulich School of Medicine & Dentistry, Western University on April 12, 2018 at the London Convention Centre in London, Ontario.

Canadian Medical Hall of Fame Laureates are individuals whose contributions to medicine and the health sciences have led to extraordinary improvements in human health. Their work may be a single meritorious contribution or a lifetime of superior accomplishments. Pioneers in their field, they are role models for Canadians and an inspiration to our youth to pursue careers in the health sciences.

Defining health care as “a relational process involving movement towards an experience of integrity and wholeness,” Dr. Balfour Mount has worked to ensure compassion has kept pace with power in our treatment of life-limiting and life-ending illnesses and disease. Credited with coining the term “palliative care,” Dr. Mount recognized the need for humane and compassionate ‘whole-person’ care to alleviate suffering and enhance dignity for terminally ill patients and their families.

A 1973 research study of patients with life-limiting illnesses at McGill’s Royal Victoria Hospital piqued Dr. Mount’s interest in the needs of the terminally ill and their families.  He travelled to the United Kingdom to learn firsthand about the hospice movement and eventually persuaded the leadership of the Royal Victoria Hospital to open the first comprehensive Palliative Care Service in 1975, and began the McGill Programs in Whole Person Care in 1997.

Dr. Mount is generally recognized as having achieved integration of palliative care as integral to effective and humane health care. Future generations of patients and their families will experience dignity and compassion facing some of their greatest challenges because of his vision.

Joining Dr. Mount among the six new laureates is Dr. Cheryl Rockman-Greenberg a member of the MDCM Class of 1974 who has devoted her career to bringing advanced medical knowledge and care to isolated and often vulnerable indigenous populations as a Professor of the University of Manitoba, and clinician scientist in the Children’s Hospital Research Institute of Manitoba.

Congratulations to all the new laureates!