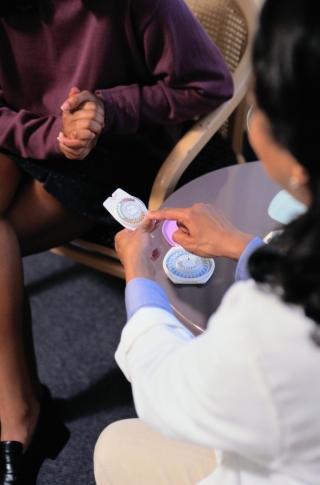 Domestic violence takes many forms. The control of a woman’s reproductive choices by her partner is one of them. A major study published in PLOS One, led by McGill PhD student Lauren Maxwell, showed that women who are abused by their partner or ex-partner are much less likely to use contraception; this exposes them to sexually transmitted diseases and leads to more frequent unintended pregnancies and abortions. These findings could influence how physicians provide contraceptive counselling.
Negotiating for contraception

A striking result was that when they do use contraception, women who experience intimate partner violence – physical or sexual – are less likely to use condoms. Instead, they often resort to contraceptive methods that they don’t need to negotiate with their partners: for example, contraceptive injections or sterilisation in developing countries, or intrauterine devices in Western countries.

These findings come from an analysis synthesizing the best studies existing on the subject, mostly done in the US, as well as in India, South Africa, Zimbabwe and Nicaragua. The results suggest more than a mere correlation, indicating that partner violence has a causal effect on women’s use of contraception. The research team selected studies that took into account other potential factors and studies in which questions on violence were always asked before questions on contraception.

“When talking to abused women, I had often heard them mention they were opting for contraception methods their male partner could not refuse,” Maxwell says. “I wanted to know whether, across countries, women who experience intimate partner violence are less able to use contraception, which might explain why rates of abortion and HIV transmission are higher among women abused by their partners.” In African countries, women who experience partner violence are three times more likely to contract HIV than women who do not, according to studies cited by the World Health Organisation.

This study indicates global efforts to improve access to contraception, like the Family Planning 2020 initiative recently announced by the United Nations, need to take domestic violence into account. One of the Millennium Development Goals set by the UN in 2000 was to achieve universal access to reproductive health by 2015. “We have not met our targets in terms of access to contraception,” Maxwell says. “This is detrimental to maternal and child health and to women’s education. To improve both, we should consider partner violence when creating programs designed to improve women’s access to contraception.”

For example, some NGOs involve male partners in contraceptive counselling. This research suggests it is important to screen for intimate partner violence before including men in the conversation around contraception. If not, the presence of violent partners could undermine efforts to offer women contraception.

These research findings also have implications for medical training. It is important to train healthcare providers, so family doctors, Ob/Gyns, nurses and midwives can screen their patients for domestic violence. It would improve detection of a phenomenon that has a major impact on women’s health and lives.

Estimating the Effect of Intimate Partner Violence on Women’s Use of Contraception: A Systematic Review and Meta-Analysis.