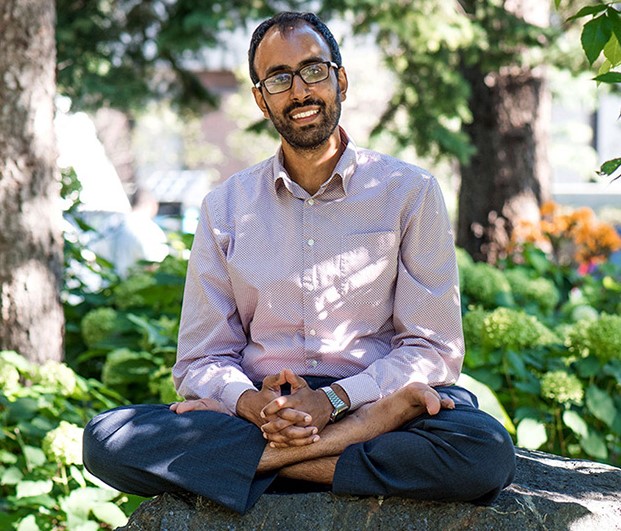 Digital technology has the potential to play a significant role in geriatric psychiatry, but only if the personal element is retained as the focus of treatment, says Dr. Soham Rej, of the Institute of Community and Family Psychiatry (ICFP) at the JGH.

Interest in this sub-specialty of psychiatry continues to grow, given the steadily rising proportion of seniors in the population as a whole. This type of treatment is likely to become especially prevalent in CIUSSS West-Central Montreal, home to one of Canada’s highest concentrations of older adults.

These individuals are at risk for such conditions as depression, anxiety and social isolation, as well as the need to cope with dementia, physical illness and a variety of comorbidities. Often, these concerns are best addressed by multidisciplinary teams composed of psychiatrists, social workers, geriatricians, occupational therapists, nurses, primary care physicians, and other professionals.

For this reason, Dr. Rej was motivated to organize the annual Geriatric Psychiatry Academic Day, which has attracted about 100 healthcare professionals a year since it was launched in 2017. The most recent colloquium in September examined the role of technology in geriatric health.

The impact of technology can be significant, if it enhances the healthcare system’s ability to cope with mounting demands for service, Dr. Cheryl Forchuk, of the University of Western Ontario, said at the most recent conference.

“Most Canadians with mental health issues never seek treatment,” she explained, “and if they did, we have nowhere near the capacity to accommodate all of them.”

Technology, then, might offer a solution by allowing patients to forego most visits to hospitals or clinics, without losing the connection to healthcare professionals. Skype, for example, might become a practical alternative to face-to-face visits, with various apps being developed to monitor symptoms remotely.

Dr. Ipsit Vahia, a keynote speaker from Harvard University, predicted that technology will help to track patients’ compliance with medication, a major problem in psychiatry.

In addition, he said, mobility is being studied as a biomarker for psychiatric distress. Thus, a fitness device worn by a patient could alert healthcare professionals to the presence of a major depression if, for example, it shows the person has a marked reduction in physical activity.

“This sort of passive measurement is helpful, because it can alert physicians without requiring the patient to do anything,” Dr. Vahia explained.

Also on the horizon is the use of artificial intelligence in mental health, an area that is being explored by Dr. David Benrimoh, a psychiatry resident at McGill University.

“Because AI learns from the data it accumulates,” he said, “we can create algorithms that will analyze a multitude of variables and predict the optimal therapy for a person’s symptoms. This means that more patients will improve with initial treatment, rather than having to endure a lengthy trial-and-error process.”

Dr. Rej says he’s heartened by new collaborations and projects at several sites in CIUSSS West-Central Montreal. These include meditation, yoga, health education, clinical trials of mindfulness, clinical programs that teach life skills and exercise, and the development of a new team in the Psychiatry Department that focuses on the behavioural and psychological symptoms of dementia.

Dr. Rej strongly believes that outcomes for patients will improve as awareness is raised within the healthcare system. To that end, he plans to co-host the annual scientific meeting of the Canadian Academy of Geriatric Psychiatry in Montreal in October.