A team from the Research Institute of the McGill University Health Centre (RI-MUHC) led by Dr. Dao Nguyen, respirologist and researcher in the Translational Research in 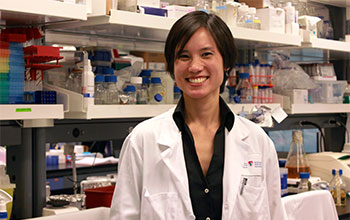 Cystic fibrosis, which affects the respiratory and digestive systems, is the most common fatal genetic disease that affects almost 4,000 people in Canada and 1,300 in Québec.

The researchers identified the mode of action of one bacterium called Pseudomonas aeruginosa that makes patients with cystic fibrosis very sick. This bacterium affects almost half of the patients with CF in Quebec and in 15 per cent of the cases it carries a genetic mutation, LasR, which causes severe inflammation and requires lung transplantation.

Dr. Nguyen’s team is the first to establish a link between this genetic mutation and this inflammation that is abnormally elevated in patients with cystic fibrosis.

Their findings suggest this bacterium may worsen pulmonary inflammation and directly contribute to the progression of chronic lung disease in CF patients, as well as lead to other pulmonary diseases such as Emphysema.

This research opens the door to the discovery of other treatments and gives hope to patients with cystic fibrosis.

The study, funded by the Canadian Institutes of Health Research and Cystic Fibrosis Canada, was published online on July 31 in the journal Science Advances.