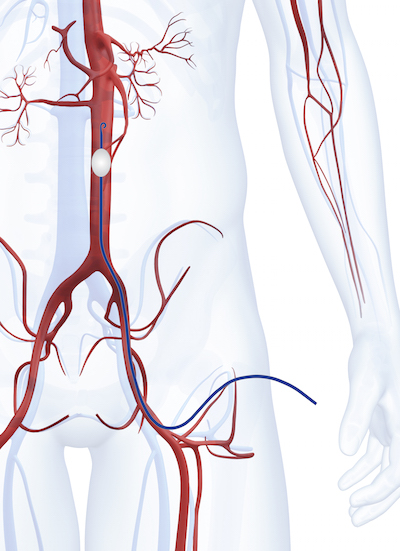 Most early deaths in trauma patients result from hemorrhaging, so it’s vital that surgeons race to locate and stop it. A new balloon catheter which quickly stops internal bleeding caused by pelvic fractures is leading a revolution in emergency bleeding control, and it’s now available in Canada. A trauma team at the Montreal General Hospital of the McGill University Health Centre (MGH-MUHC) recently used it to save two patients with life-threatening hemorrhage.

The medical device named ER-REBOA™ Catheter – which stands for Eliason and Rasmussen, the last names of its two inventors, and Resuscitative Endovascular Balloon Occlusion of the Aorta – is a thin and stiff tube with an inflatable balloon, and a curved tip that reads arterial pressure.  Usually, the only way to control bleeding of the aorta in unstable patients is to open the chest and block the artery with a metal clamp, a procedure that takes time, causes a lot of pain and more blood loss.

“This catheter allows us to stop the bleeding anywhere below the abdomen and pelvis in less than a minute. That’s how fast it can be applied,” says Dr. Andrew Beckett, trauma surgeon and ICU doctor at the MUHC, who championed the implementation of the Reboa program in Canada. “Most importantly, it rapidly restores blood flow to the heart and brain, your most essential organs.”

Saving lives in the battlefield

The Reboa was developed by American vascular surgeons Dr. Todd E. Eliason and Dr. Jonathan L. Rassmusen during the Iraq and Afghanistan wars in 2006, where soldiers with combat wounds in the pelvis and abdomen would bleed to death. They based their design on an older model invented during the Korean War in the 1950’s. Working in collaboration with the company Prytime Medical, they fine-tuned the balloon catheter, transforming it into a minimally invasive and easy-to-use device that can be quickly put in place without X-rays and doesn’t damage blood vessels.

“We insert the catheter at the groin level through the femoral artery and move it up about 28 cm into the aorta,” says Dr. Beckett, who is also a lieutenant colonel in the Royal Canadian Medical Services and Chief of General Surgery and Trauma for the Canadian Military. “Once inflated, the balloon cuts off blood supply to the lower body, buying us time to locate and control the bleeding without opening the abdomen.

The procedure requires close attention to training to ensure patient safety. Once they position the catheter, trauma surgeons must work within a 45-minute time frame or the patient may suffer from complications due to lack of blood flow to the legs or kidneys. At the MGH, the implementation of the program was a team effort: most trauma team leaders can apply the catheter, and nurses know how to use and set it up.

The device, which has already been successfully used in more than a thousand patients in the United States and Japan, and by the Canadian Military in Iraq, was approved by Health Canada in October 2017 and first used at the MGH in May 2018.

“The Montreal General Hospital Foundation, with the essential support of its donors, is proud to provide funding for an innovative and cutting edge vital care treatment such as the ER-Reboa catheter. Our Foundation plays an essential role in elevating excellence in patient care for the greater benefit of the community,” says Jean-Guy Gourdeau, president and CEO of the Montreal General Hospital Foundation, which will fund the program for the next four years.

The beginning of a revolution in trauma care

The catheter has also been successfully used in Obstetrics to control post-partum hemorrhage, a fatal complication of pregnancy. According to Dr. Beckett, the Reboa is leading a revolution in trauma care.

About the McGill University Health Centre

The McGill University Health Centre (MUHC) is one of the world’s foremost academic health facilities. Building on the tradition of medical leadership of its founding hospitals, the MUHC provides exceptional multidisciplinary patient-centric care. Affiliated with the Faculty of Medicine of McGill University, the MUHC continues to shape the course of adult and pediatric medicine by attracting clinical and research expertise from around the world, assessing the latest in medical technology, and training the next generation of medical professionals. In collaboration with our network partners, we are building a better future for our patients and their families; for our employees, professionals, researchers and students; for our community and above all, for life. www.muhc.ca