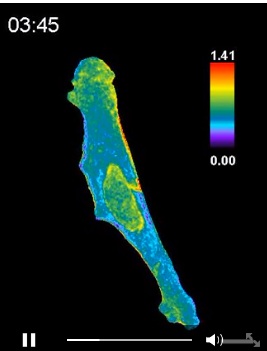 A protein commonly found in human cells could be an important switch that activates cancer cell metastasis, according to a new study by researchers at the Montreal Neurological Institute and Hospital – The Neuro at McGill University and the MUHC. The finding focuses attention on a biological mechanism that until now was largely overlooked. The discovery of the protein’s effect significantly expands our understanding of epithelial cancers such as breast and lung cancer.

The study examined the function of a protein called DENND2B. During childhood development, DENND2B likely plays a role in the normal migration of cells. In adults, cell migration is greatly reduced, but in the case of cancer, there is unwanted cell migration, contributing to one of the most puzzling aspects of cancer cells—metastasis to new locations.

“DENND2B activates another protein in the cell called Rab13, which is an enzyme that promotes cell migration,” says Dr. Peter McPherson, a principal researcher whose laboratory at The Neuro made the discovery. “Until now, we didn’t know how Rab13 was activated to initiate cell migration.”

Maria Ioannou, a graduate student in Dr. McPherson’s laboratory, found that Rab13 has an unusually high degree of expression in many forms of cancer, especially epithelial cancers that often metastasize to the brain.

“It was important to see exactly where in the cell Rab13 was being turned on,” says Ioannou. “Where it’s activated is important for figuring out how it functions. We saw that the DENND2B protein was activating Rab13 at the leading edge of the cell, an important point for cell migration.”

Dr. McPherson sees Rab13 as a focus for future research into cancer therapies. His laboratory showed a significant result when, in collaboration with Dr. Morag Park at the Goodman Cancer Centre at McGill University, they injected highly aggressive human breast cancer cells into mice under two conditions—one with cells having high levels of Rab13 protein, and one in which Rab13 was artificially removed.

“In the case of the cells with reduced Rab13 levels, the cancer either did not grow at all or formed a smaller tumour,” notes Dr. McPherson. “Furthermore, the smaller tumour did not metastasize into other tissue.”

No one had considered targeting Rab13 in relation to cancer before this study, says Dr. McPherson, adding that clinical trials involving the discovery are still some time away.