After seven years of collaboration, a team of researchers from the Research Institute of the McGill University Health Centre (RI-MUHC) has developed an intelligent molecule that could significantly extend the lives of patients with glioblastoma, an incurable and devastating brain cancer that affects people of all ages, regardless of their lifestyle. According to the results of a study led by Dr. Siham Sabri and published in the journal Clinical Cancer Research from the American Association of Cancer Research, this molecule called ZR2002, administered orally and capable of penetrating the blood-brain barrier, could delay the multiplication of glioblastoma stem cells resistant to the standard treatment offered to patients.

Glioblastoma is a cancer that affects 1,500 Canadians each year, for whom the current average survival rate is 15 months following diagnosis. Unfortunately, standard treatment, which has changed very little over the past 15 years, does not prevent the tumour from recurrence. 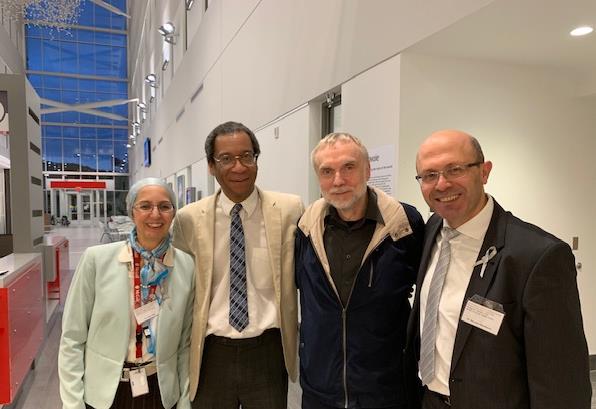 “Glioblastoma stem cells, which are extremely aggressive and highly resistant to the standard radiation and chemotherapy treatment temodal®, are believed to cause tumour recurrence. They have the ability to repair themselves when attacked with this treatment,” explains Dr. Bertrand Jean-Claude, co-author of the study and senior scientist in the Metabolic Disorders and Complications Program at the RI-MUHC.

“The ZR2002 molecule we developed is designed to kill two birds with one stone: on top of attacking the tumour, it destroys its defence system,” adds the researcher, who is also the director and founder of the Drug Discovery Platform at the Centre for Translational Biology at the RI-MUHC. Dr. Jean-Claude has been working for more than 20 years on the concept of molecules capable of thwarting cancer tumours, which he calls combi-molecules.

Patients with glioblastoma usually undergo surgery to remove as much of the tumour as possible from the brain. To increase the chances of killing the remaining cancer cells, they then undergo six weeks of radiotherapy with chemotherapy followed by six months of chemotherapy treatment.

“In approximately 50 percent of glioblastoma patients, tumours carry a protein called EGFR that promotes the proliferation of tumour cells and makes them resistant to chemotherapy and radiotherapy,” says Dr. Bassam Abdulkarim, co-author of the study, radiation oncologist at the MUHC and senior scientist in the Cancer Research Program at the RI-MUHC. “However, although the standard treatment is capable of damaging the DNA of cancer cells, it cannot circumvent the effects of EGFR. As a result, in many patients, the tumour grows back again while their treatment is still ongoing.”

The ZR2002 molecule was designed to solve this problem. On one hand, it damages the tumour’s cellular DNA and, on the other hand, it irreversibly blocks the action of EGFR proteins.

To test the efficacy of the new molecule, researchers had to establish glioblastoma stem cells resistant to the chemotherapy used for patient treatment. This is a complex task Dr. Janusz Rak, a senior scientist at the RI-MUHC, professor in the Department of Pediatrics at McGill University, and a world-renown glioblastoma researcher, succeeded in performing.

“In an experimental mouse model, we subjected these highly aggressive and resistant stem cells to the action of the drug ZR2002,” says Dr. Siham Sabri, lead author of the study, scientist in the Cancer Research Program at the RI-MUHC and Assistant Professor in the Department of Pathology, McGill University. “The results of the study show that when administered orally, ZR2002 induces antitumor activity significantly superior to that of temodal® and kills tumour cells through a multimodal mechanism of action.”

“The challenge is not only to fight the resistance of glioblastoma stem cells,” adds Dr. Bassam Abdulkarim, who is also a professor in the Department of Oncology at McGill University “but also to deliver chemotherapy to the brain, which is protected by the blood-brain barrier. Our team has succeeded in meeting these two major challenges.”

To demonstrate that the orally administered molecule could cross the blood-brain barrier, the team used mass spectrometry imaging, a leading-edge technology acquired at the Drug Discovery Platform of the RI-MUHC during the modernization of the MUHC in 2015.

The researchers now hope to be able to continue their research and test this first-in-class combi-molecule in a clinical trial for patients diagnosed with glioblastoma.

“Because glioblastoma is an orphan disease, funding is more difficult to obtain, and we thank the MUHC Foundation for its essential support,” says Dr. Abdulkarim. “If we are successful in setting up a clinical trial, this will be the first time that a molecule designed and synthesized at the RI-MUHC will be clinically tested at our Centre for Innovative Medicine (CIM), for the benefit of patients.”