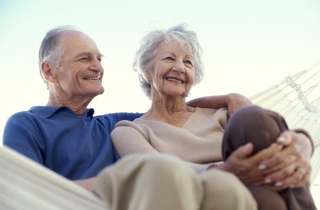 It’s hard to predict what the next 20 years have in store for us. Yet, 50 000 Canadians will spend the next two decades of their lives contributing to the advancement of our knowledge of the mechanisms of aging.

These men and women are taking part in the Canadian Longitudinal Study on Aging (CLSA), the largest study of its kind ever undertaken in this country. This ongoing project has received a grant of $ 41.6 million from the Canadian Institutes of Health Research (CIHR) to continue its work over the next five years.

A total of 50 000 people aged 45 to 85 will be followed for 20 years to collect data that will be used in the advancement of knowledge on topics such as the development of diseases or social habits that affect how we age. Ultimately, this information will be used to promote healthy aging.

A major study that will provide in-depth understanding of aging has received a shot in the arm. The Canadian Longitudinal Study on Aging (CLSA) has been awarded a $41.6 million grant by the Government of Canada to continue its work for the next five years.

This most comprehensive study of aging ever undertaken in Canada began in 2010 and is led by researchers across the country from McMaster, McGill and Dalhousie universities, with two key players in Quebec: the Research Institute of the McGill University Health Centre (RI-MUHC) and Université de Sherbrooke.

A total of 50,000 Canadians are being followed over 20 years to provide information which can be used to improve understanding on subjects ranging from disease development to how social habits may affect how someone ages, and ultimately to promote healthy aging. The funding is from the Canadian Institutes for Health Research (CIHR).

“I am extremely thankful to CIHR for their continuous support of this unique project,’’ says CLSA co-principal investigator Dr. Christina Wolfson, RI-MUHC researcher and professor in McGill University’s Departments of Medicine and of Epidemiology, Biostatistics and Occupational Health. “Our study looks at the social aspects of aging as well as the onset of disease and disability, and includes participants as young as 45. It will provide an extremely important resource of data, physical measures and biospecimens from our participants that will be used by researchers across the country in projects that contribute to improve the health of Canadians.”

Across the country, eleven sites take part in the CLSA’s data collection, and the RI-MUHC is the home of the Statistical Analysis Centre, where Dr. Wolfson’s team examines the quality and reliability of the data and prepares them for release to researchers.

Recently, data from more than 21,000 participants who took part in telephone interviews were made available, providing a snapshot of Canadians aged 45 to 85. Researchers have made requests for data to further research on topics such as hearing loss, neurological conditions, injuries and the health of older veterans.

“The aging process is so complex and heterogeneous from one person to another that we need these large population studies with a large number of participants to be able to explore all the issues related to aging,” adds Dr. Hélène Payette, researcher at the Research Centre on Aging and a professor at the Faculty of Medicine and Health Sciences at the Université de Sherbrooke, who leads the CLSA site at the Université de Sherbrooke. “We wanted to leave this for all the future scientists and experts in the research community interested by aging. Researchers who participated in the study do not have precedence over the data.”

CLSA participant Kevin Wright, who lives in Montreal, QC, accepted to become a participant thinking that it would be a way of contributing to the development of the healthcare system in Canada, but it turned out it also contributed to his health. ‘’One of the many tests I underwent was a bone density scan.  To my surprise and to my doctor’s as well, it turned out that I have severe osteoporosis. I am now able to get treatment for this symptomless condition for which men are rarely, if ever, tested. I think I got more from my involvement in the study than I gave,’’ he explains.

The CLSA was launched through $50 million in grants from the Canadian Institutes of Health Research (CIHR), the Canada Foundation for Innovation, several provinces and universities as well as other partners to set up the research platform, recruit participants and collect data from participants.

So far, hour-long telephone interviews have been done with more than 21,000 individuals aged 45 to 85 randomly selected from across the country. An additional 26,000 people have taken part in extensive home interviews plus visited one of 11 data collection sites across the country to undergo a range of physical tests such as hearing, heart function, bone density, mobility and many other measures related to overall health. The final participants required to reach 50,000 are now being recruited, and all participants will be followed for 20 years, with interviews and data collection repeated once every three years.

To learn more about the study, visit  clsa-elcv.ca
To access the CLSA DataPreview Portal: datapreview.clsa-elcv.ca
Factbox about the CLSA: