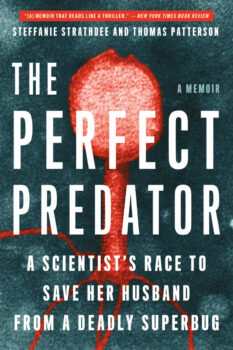 Prof. Strathdee is a Canadian infectious disease epidemiologist who received her BSc in Microbiology and PhD at the University of Toronto. She is currently Associate Dean of Global Health Sciences and Harold Simon Distinguished Professor of Medicine at the University of California San Diego where she also codirects the Centre for Innovative Phage Applications and Therapeutics (IPATH). She is also an Adjunct Professor at Simon Fraser and Johns Hopkins Universities.

In 2016, Prof. Strathdee and colleagues were credited with saving her husband Tom Patterson’s life from a deadly superbug infection using bacteriophages – viruses that attack bacteria. The case, which involved cooperation from three universities, the U.S. Navy and researchers across the globe, shows how phage therapy is a future weapon against multi-drug resistant bacterial infections. For her efforts, she was named one of TIME magazine’s Most Influential People in Health Care in 2018. She has also written a book about their ordeal, The Perfect Predator: A scientist’s race to save her husband from a deadly superbug.

We spoke to Prof. Strathdee ahead of her lecture about the worsening global AMR crisis since her family’s harrowing experience, the phage’s place in the infectious disease toolkit and the curiously low profile of superbugs.

1. What has changed about AMR since your husband Tom first received intravenous phage therapy to treat a life-threatening superbug infection in 2016?

Globally, the AMR crisis has gotten worse.  In 2019, it was estimated that 1.2 million people died directly from a multi-drug resistant bacterial infection, and 5 million people died indirectly from one.  The COVID-19 pandemic has only made the situation worse.  My husband’s case has been described as a watershed moment in the strange history of phage therapy, which has helped usher in a new era where  it is now being widely considered as the most important alternative to antibiotics. The field has come a long way since Felix d’Herelle, a self-taught French-Canadian microbiologist, discovered phage in 1917 and first used it to cure bacterial infections in 1919. I hope the new AMR Centre at McGill can carry on his legacy as a leader in fighting AMR.

2. What is the potential role of phage therapy and where do things stand now?

Phages have the potential to be an important adjunct to antibiotics, and could be used alone to treat infections in cases where there are no antibiotic options left.  There are now several clinical trials being conducted to empirically test phage therapy as an antimicrobial.  Phages are being studied not just in human and veterinary medicine, but also for their potential to replace antibiotics in agriculture, aquaculture and in livestock.  This includes natural phages sourced from the environment, but also genetically modified or CRISPR-enhanced phages and even synthetic phages.

3. What other weapons to fight infections do we need to avoid a post-antibiotic world?

We need a multi-pronged approach to addressing AMR.  Most of all, we need greater awareness and multi-sectorial interventions at all levels of society. This includes not only fields, farms, hospitals, clinics, businesses and corporations but political will at all levels of government and global health diplomacy so that national action plans to address AMR are held accountable.

4. Why is multi-drug resistant bacterial infection less discussed than other threats to human health?

There are many reasons. I can point fingers, but I’m as guilty as anyone.  Even though I’m an infectious disease epidemiologist, I didn’t appreciate how massive the AMR crisis was until my own husband almost died from a superbug! But I’ve come to see how powerful agribusiness is in downplaying the science that unequivocally shows that misuse of medically important antibiotics spreads AMR genes and is directly affecting the health of people, animals and the planet.  I’m counting on the fact that centres like yours, and the sharing of personal stories like my family’s, can make a meaningful difference.

There will be a book signing on site with Steffanie Strathdee, author of The Perfect Predator: A Scientist’s Race to Save Her Husband from a Deadly Superbug. Pre-orders available at registration.

REGISTER for the second Annual McGill AMR Symposium is on June 20th, 2022, from 9 am to 2 pm. Registration is free.