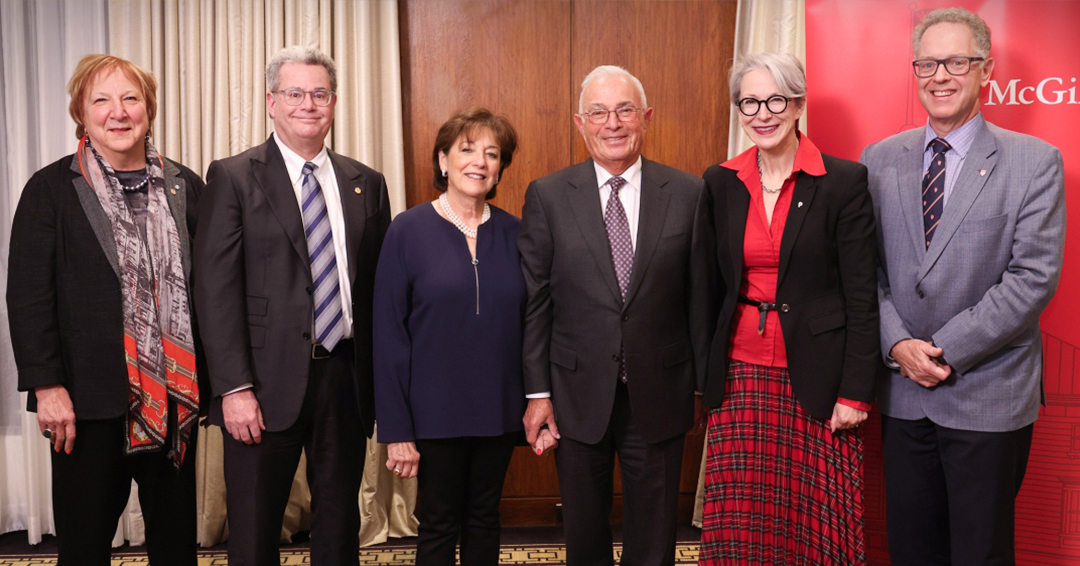 Scientists around the world are beginning to use new techniques in analyzing single brain cells to understand conditions like depression, schizophrenia, bipolar disorders and neurodegenerative diseases such as Alzheimer’s and Parkinson’s. Now, thanks to a new gift of $15.3 million from the Ludmer Family Foundation to McGill, the University and three hospital research partners will establish the Ludmer Centre Single-Cell Genomics Brain Initiative (SCGBI), with a mission to increase our understanding of the role that individual brain cells play at the molecular, anatomical and structural levels.

The donation will primarily be used to fund nine new scientific research positions with the aim of advancing brain research by investigating the brain one cell at a time, a process that will require large-scale cell technologies and data processing.

A trio of talent

Three positions will be created at each of the Ludmer Centre’s three hospital partners: the Douglas Mental Health University Institute, which will focus on psychiatric disorders; the Lady Davis Institute at the Jewish General Hospital, which will specialize in the development of analytical strategies of single-cell data; and The Neuro (Montreal Neurological Institute-Hospital), which will focus on neuroinformatics and neurological disorders.

“On behalf of the entire McGill community, I extend my sincere thanks and gratitude to Irving Ludmer and to the Ludmer Family Foundation for this visionary philanthropic gift, which builds on the extraordinary support for collaborative brain research at McGill,” said Christopher Manfredi, Interim Principal of McGill University. “Mr. Ludmer is a champion for advancing neuroscience through innovation, technology and collaboration, and we are honoured by his show of confidence in our researchers to bring new levels of understanding and insight into brain health and disease.”

“I wanted to take this opportunity to bring together research communities and support a truly collaborative effort, where partner institutions share best practices, and build on each other’s strengths,” said Irving Ludmer, BEng’57, LLD’19. “This kind of collaboration benefits the research community, and the future of brain research. It’s why both McGill and Montreal are centres of excellence at the forefront of neuroscience.”

New hope for insight into depression and schizophrenia

Dr. Gustavo Turecki, Chair of McGill’s Department of Psychiatry and Scientific Director of the Douglas Institute, will play an integral role in establishing the Initiative. His own work as a clinician-scientist involves the investigation of the neurobiology of depression and suicide.

“The possibilities for progress on brain diseases and disorders using a single-cell approach to research are enormous,” said Dr. Turecki. “We are working to offer new hope to patients and their families by using single-cell genomics, as this approach will help elucidate the changes affecting common brain illness such as depression and schizophrenia.”

“Using the detailed map of the human brain, at a single-cell resolution, as well as the technological analysis of individual brain cells in greater detail than ever before, researchers will be able to better understand normal brain function and treat psychopathologies, neurological disorders and brain cancers,” he explained.

For Dr. Turecki, expanding its current mission to include the SCGBI means the Ludmer Centre can develop into a world leader in the emerging field of single-cell brain neurobiology.

About the Ludmer Centre for Neuroinformatics & Mental Health: A Montreal-wide partnership

Established in 2013 with a foundational gift from the Ludmer Family Foundation, the Ludmer Centre for Neuroinformatics & Mental Health advances novel brain research for the prevention, diagnosis and treatment of mental illnesses, neurodevelopmental conditions and neurodegenerative diseases.

Sharing infrastructure, methodologies and results, the three hospital partners and McGill are accelerating treatment for patients, and the Ludmer Centre has already made important strides toward the ambitious goal of the creation of a comprehensive map of the brain.

Ludmer Centre Co-Director Alan Evans has previously created the highest-resolution 3D map of the whole brain anatomy in existence. The SCGBI will now add new information about the distribution of different cell types throughout the brain. Co-Director Patricia Silveira has developed a powerful new strategy for linking gene expression in the brain to clinical and neuroimaging metrics. The SCGBI will provide a critical link between gene networks, clinical aspects related to their function, and neuroimaging data. Co-Director Celia Greenwood has developed advanced mathematical and statistical machinery to handle the wealth of data that will be generated by the work of the SCGBI.

A record of generosity

This latest gift adds to the Ludmer Family Foundation’s long record of generosity to McGill, bringing its philanthropic support for University initiatives to more than $32 million. In addition to its previous funding of brain research, the Foundation has supported the Rosalind and Morris Goodman Cancer Institute, the Steinberg Centre for Simulation and Interactive Learning, McGill’s Departments of Psychiatry and Psychology, and research into inflammatory bowel disease.

Beyond McGill, the foundation supports numerous causes and organizations in the areas of health, social services, education and research.