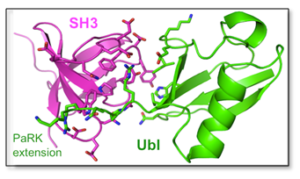 McGill University researchers have unlocked a new door to developing drugs to slow the progression of Parkinson’s disease. Collaborating teams led by Dr. Edward A. Fon at the Montreal Neurological Institute and Hospital -The Neuro, and  Dr. Kalle Gehring  in the Department of Biochemistry at the Faculty of Medicine, have discovered the three-dimensional structure of the protein Parkin. Mutations in Parkin cause a rare hereditary form of Parkinson’s disease and are likely to also be involved in more commonly occurring forms of Parkinson’s disease. The Parkin protein protects neurons from cell death due to an accumulation of defective mitochondria. Mitochondria are the batteries in cells, providing the power for cell functions. This new knowledge of Parkin’s structure has allowed the scientists to design mutations in Parkin that make it better at recognizing damaged mitochondria and therefore possibly provide better protection for nerve cells. The research will be published online May 9 in the leading journal Science.
VIDEO: Parkin protein

“The majority of Parkinson’s patients suffer from a sporadic form of the disease that occurs from a complex interplay of genetic and environmental factors which are still not fully understood, explains Dr. Fon, neurologist at The Neuro and head of the McGill Parkinson Program, a National Parkinson Foundation Centre of Excellence. “A minority of patients have genetic mutations in genes such as Parkin that cause the disease. Although there are differences between the genetic and sporadic forms, there is good reason to believe that understanding one will inform us about the other. It’s known that toxins that poison mitochondria can lead to Parkinson’s-like symptoms in humans and animals. Recently, Parkin was shown to be a key player in the cell’s system for identifying and removing damaged mitochondria.”

Dr. Gehring, head of McGill’s structural biology centre, GRASP, likens Parkin to a watchdog for damaged mitochondria. “Our structural studies show that Parkin is normally kept in check by a part of the protein that acts as a leash to restrict Parkin activity. When we made mutations in this specific ‘leash’ region in the protein, we found that Parkin recognized damaged mitochondria more quickly. If we can reproduce this response with a drug rather than mutations, we might be able to slow the progression of disease in Parkinson’s patients.”

Parkin is an enzyme in cells that attaches a small protein, ubiquitin, to other proteins to mark them for degradation. For example, when mitochondria are damaged, Parkin is switched on which leads to the clearing of the dysfunctional mitochondria.  This is an important process because damaged mitochondria are a major source of cellular stress and thought to play a central role in the death of neurons in neurodegenerative diseases.

Husband and wife team, Drs. Jean-François Trempe and Véronique Sauvé, are lead authors on the paper.  Dr. Sauvé led the Gehring team that used X-ray crystallography to determine the structure of Parkin.  Dr. Trempe in the Fon laboratory directed the functional studies of Parkin.

“We are proud to invest in scientific excellence and to fund discovery stage research so that investigators like Dr. Gehring and Fon in Canada can test new theories and pursue promising new leads. We believe that our National Research Program plays an important role in the global search for better treatments and a cure for Parkinson’s disease,” says Joyce Gordon, President and CEO, Parkinson Society Canada.

Funding was provided by grants from the Parkinson Society Canada, the Canadian Institutes for Health Research, and infrastructure support from the Fonds de recherche Québec and the Canada Foundation for Innovation.