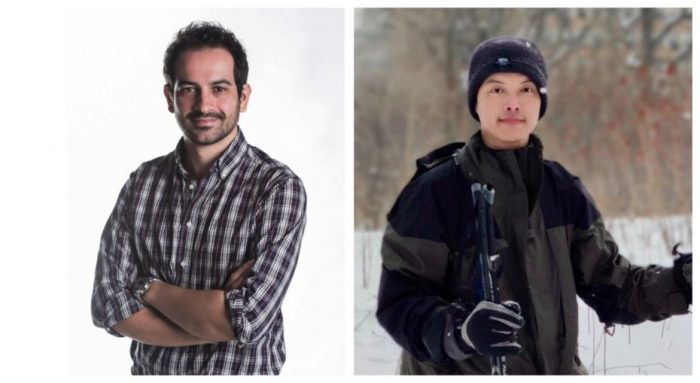 Dr. Massimiliano Orri, a Marie-Curie and Canadian Institute of Health Research post-doctoral fellow with McGill’s Group for Suicide Studies (MGSS), and Dr. Wei-Hsiang Huang, Assistant Professor with the Centre for Research in Neuroscience, each received a $70,000 USD Young Investigator Grant for their respective two-year projects.

They are two of the 150 promising young scientists from 17 countries, among 1,012 applicants, who were awarded a total of $10.3 million U.S. this year by NARSAD, the National Alliance for Research on Schizophrenia and Depression. As reported on September 24, Budhachandra Singh Khundrakpam, a research associate at The Neuro, also earned a Young Investigator Grant to study the impact of substance use on adolescent brain development and mental health outcomes.

Orri’s project is called Genome-Wide Investigation of Irritable and Non-Irritable Depression Phenotypes: Toward a Refinement of the Genetic Architecture of Depression.

He will carry out his research on behalf of the MGSS at the Department of Psychiatry of the Douglas Mental Health University Institute.

Orri said that “during the past three years, my research at the MGSS, supervised by Drs. Gustavo Turecki and Marie-Claude Geoffroy (who has won an award herself, see below), has tried to better understand the complexity of mood disorders by investigating the association between irritability, depression, and suicide risk.”

“Thanks to this BBRF award, we will be able to better understand the heterogeneity of mood disorder manifestations at the genetic level.”

The BBRF noted that “Dr. Orri will lead a genome-wide association study to identify specific genetic variants associated with irritable and non-irritable depression using data from large genotyped samples from the UK Biobank and 23andMe, with data on almost 2 million individuals reporting on their depression as well as on irritability traits.”

23andMe is a California-based personal genomics and biotechnology company.

Orri added that “the award is also an important step in my career and a key milestone on my path to becoming an independent investigator.”

“Suicide is among the 10 leading causes of death in most developed countries, and a major cause of death in men under 40,” notes the MGSS, which was created in 2002 to investigate risk factors associated with suicidal behaviour and related conditions. “Suicide has long been taboo – historically, this has led to little or unclear policy surrounding suicide and reduced research in the field. Today, we understand that suicide is not a choice, but a result of disease, brought on by social, psychological, clinical, and biological factors.”

Huang’s research for the CRN’s Brain Repair and Integrative Neuroscience (BRaIN) Program at the Research Institute of the McGill University Health Centre focuses on “developing and applying innovative technologies to uncover how autism spectrum disorder (ASD)-causing mutations affect brain functions and behaviours. My lab focuses on studying how mosaic mutations cause ASD: a newly emerged and unsolved question in the field.”

“Advances in neurogenetics discovered that many psychiatric disorders, including autism and schizophrenia, are increasingly caused by mosaic genetic mutations that only affect a small portion of the cells,” he says. “Therefore, my work will provide an important framework to understand pathogenesis in different mental health disorders.”

“I am an expert in understanding the molecular and cellular mechanism underlying neural dysfunction in ASDs.”

The BBRF notes on its website that Dr. Huang’s is important because despite genetic mutations affecting few brain cells, those mutations “often cause symptoms just as severe as germline genetic mutations. This suggests that mutant cells (affect) the development and function of surrounding healthy cells.”

BBRF president and CEO Jeffrey Borenstein states on the Foundation’s website that “Young Investigators represent a new generation of researchers who will pioneer breakthroughs in mental health research… The awards function as seed funding for new directions which would otherwise be highly unlikely.”