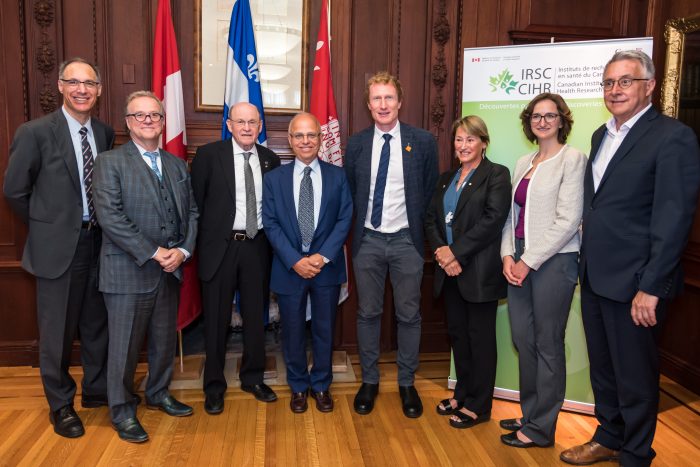 Marc Miller, Member of Parliament (Ville-Marie–Le Sud-Ouest–Île-des-Sœurs, Quebec) and Parliamentary Secretary to the Minister of Crown-Indigenous Relations, on behalf of the Honourable Ginette Petitpas Taylor, Minister of Health, announced today at McGill an investment of up to $6 million for a scientific task force of top researchers to develop new and improved approaches to cancer treatment and care. The funding will be distributed over four years to the new pan-Canadian program, the Stand Up to Cancer (SU2C) Canada Metastatic Breast Cancer Dream Team. The team includes researchers from across Canada led by two of McGill’s leading scientists, Dr. Nahum Sonenberg and Dr. Michael N. Pollak.

The Canadian Cancer Society estimates that one in eight Canadian women will develop breast cancer during her lifetime, a statistic that accounts for 26% of new cases of cancer and 13% of all cancer deaths in Canadian women. The SU2C Canada Metastatic Breast Cancer Dream Team will work collaboratively to increase survival rates of patients with metastatic breast cancer, the most advanced stage of the disease.

“McGill is grateful to the Government of Canada for supporting this world-class team of researchers in the quest to solve critical problems associated with metastatic patient-care and to fast-track ground-breaking therapies,” said Martha Crago, Vice-Principal, Research and Innovation. “The SU2C Dream Team, under the leadership of Drs. Sonenberg and Pollak, will carry on McGill’s celebrated tradition of research excellence and innovation in health.”

Co-team leads Dr. Nahum Sonenberg, Professor of Biochemistry and member of the Goodman Cancer Research Centre, and Dr. Michael N. Pollak, Professor of Medicine and a clinical oncologist at the Jewish General Hospital, have assembled a team of Canadian scientists with multidisciplinary expertise. Included are those recognized as world leaders in mRNA translation—a process that plays important roles in homeostatic cell growth and proliferation, and when dysregulated leads to cancer—experts in the pathophysiology of breast cancer, and medical oncologists with expertise in clinical research and breast cancer treatment.

Over the next four years, the Dream Team will work to develop a translational cancer research project that addresses prevention strategies for those at risk of metastatic cancer, and to gain a mechanistic understanding of metastatic progression. They will also work toward designing and carrying out projects that accelerate the application of preventative, diagnostic, or therapeutic approaches for high-priority areas with a critical need for rapid progress beyond current medical care.

The SU2C Canada Metastatic Breast Cancer Dream Team is sponsored by the CIHR Institute of Cancer Research, in partnership with the Canadian Cancer Society (CCS) and Stand Up to Cancer (SU2C) Canada, and with scientific oversight by the American Association for Cancer Research (AACR).

Founded in Montreal, Quebec, in 1821, McGill is a leading Canadian post-secondary institution. It has two campuses, 11 faculties, 13 professional schools, 300 programs of study and over 40,000 students, including more than 10,400 graduate students. McGill attracts students from over 150 countries around the world, its 12,500 international students making up 30% per cent of the student body. Over half of McGill students claim a first language other than English, including approximately 20% of our students who say French is their mother tongue.