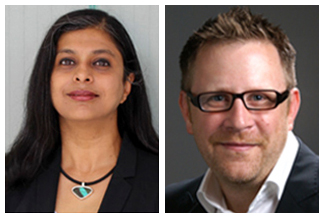 Dr. Srividya Iyer, Assistant Professor in the Department of Psychiatry at McGill’s Faculty of Medicine and Dr. Martin Drapeau, Associate Member of the Department of Psychiatry were among the 70 new members of The College of New Scholars, Artists and Scientists, announced by the Royal Society of Canada on September 12. The Induction Ceremony will take place at the RSC’s Annual General Meeting in Winnipeg, Manitoba on November 24.

With seven new members in total, McGill has more new inductees this year than any other university in the country. The new members of the College will address issues of particular concern to Canadian society, including mental health and environmental management, taking advantage of the interdisciplinary approaches fostered by the College.

Fifty-one Canadian universities and the National Research Council nominate members to the College, which is the first national system of multidisciplinary recognition for the emerging generation of Canadian scholarly, scientific and artistic leadership from coast-to-coast.

“McGill celebrates the contributions the inductees to the Royal Society of Canada’s New College are making to their fields. The university community also looks forward to the discoveries of new knowledge that all these researchers will continue to contribute, not only to the research culture of our University, but at the provincial, national and international level as well,” said Martha Crago, Vice-Principal, Research and Innovation.

Dr. Srividya Iyer, who is also a researcher at the Douglas Hospital Research Centre, is an international leader in youth mental health and early intervention, especially for serious mental illnesses. Her research seeks to ensure that more young people in Canada and beyond have timely access to appropriate mental healthcare and enjoy well-being and social participation. Along with exceptional research and clinical accomplishments, Srividya’s outstanding contributions include the engagement of diverse stakeholders, particularly youth and family service users, in services delivery and research. In 2017, Dr. Iyer was also honoured both with the Faculty’s Maude Abbott Prize and with the McGill’s Principal’s Prize for Outstanding Emerging Researchers.

Dr. Martin Drapeau, Professor of Counselling Psychology and of Psychiatry at McGill, is a leader in research on best practices in psychology. His research focuses on psychotherapy process and outcome and on clinical practice guidelines. He has served or continues to serve in a number of different capacities to institutions such as the Canadian and the American Psychological Associations, the Institut national d’excellence en santé et services sociaux, and others.

Congratulations to Dr. Iyer, Dr. Drapeau and to all of the new members!