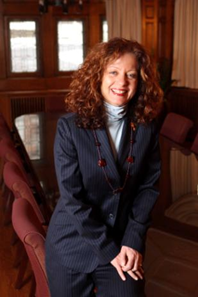 Since beginning her McGill career while still a student over 30 years ago, April Caluori’s contributions to the University and the Faculty of Medicine have been nothing less than exceptional. While it gives rise to heartfelt emotion, we congratulate her warmly for a job superbly well done as we announce her retirement, as of Nov. 11, 2011, a decision she took over the summer months.

As chief-of-staff at the outset of former VP-Dean Levin’s administration, and then as Executive Director, Faculty of Medicine and Health Affairs, April has overseen with great sensitivity and strength the broad spectrum of administrative activities at the Faculty. These range from human resources, finance and information technology to the strategic direction on all things related to its governance. She has been a constant source of support to the Deanery and beyond, and in these consultations we all saw her unwavering commitment, love for McGill and invariable professionalism. She has ensured our safe passage through the Faculty’s daily trials and its countless successes.

April joined McGill, the second generation to do so in her family, in 1978 and was recognized quickly for her strong administrative skills. Over the next few decades, she carved out an inspirational career path within the University, which began at the Royal Victoria Residence, continued onto Central Admissions and then the Faculty of Education, where she served as Human Resources Officer, as well as Student Affairs Officer. April joined McGill’s Central Human Resources Department a decade later, and then continued expanding her expertise and McGill knowledge as HR Officer for the Physical Resources group and Human Resources Central Labour Relations. She came to the Faculty of Medicine in 1998 as Manager of Human Resources and was promoted to Director of Administration a few years later. April assumed her current position of Executive Director, Faculty of Medicine and Health Affairs, in 2008, and after two intense years of concurrent graduate studies, she was awarded the highly regarded McGill Master’s in Management (International) degree.

An extremely dedicated administrator, working with great purpose behind the scenes, April was instrumental in the Faculty’s “Think Dangerously” strategic planning initiative, as well as its Administrative Excellence project, designed to open new career doors, while achieving both process efficiencies and workload solutions. She is the first to say, there is still much work to be done, but without her vision and perseverance, the talents of the “Dream Team” and the support of this Faculty “Village,” we would be several years away from the transformations now taking place. April always had an ear for her colleagues and a potential solution for what appeared an insoluble problem or a Hobson’s choice.

We have been extremely fortunate to know and work with April in our community, and we thank her for her insights and fortitude of spirit throughout her time here. She will be sorely missed, but we invite you to join us in wishing her great adventure and gratification as she begins a new chapter in what has been an inspirational career.