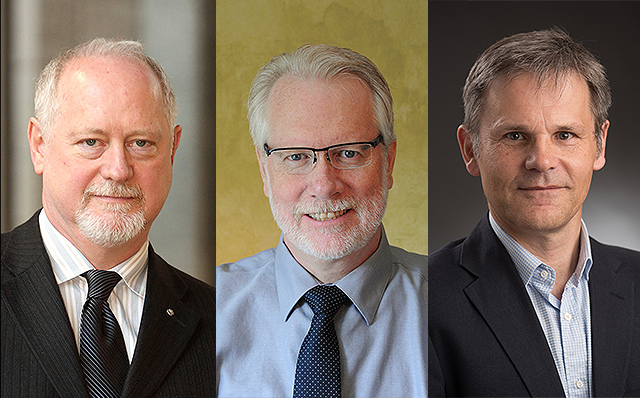 The Royal Society of Canada announced the induction of 89 new fellows this week, with three of the ten McGillians representing the Faculty of Medicine. The new cohort of Fellows, which includes Dr. Guy Rouleau, Dr. Charles Bourque and Dr. William Foulkes, will be formally inducted into the RSC on November 18, in Kingston. They join the more than 160 McGill-affiliated Fellows inducted to the Society since 1966.

Established in 1882, the RSC is Canada’s national academy of distinguished scholars, artists and scientists. The RSC consists of over 2,000 Fellows who have been selected by their peers for outstanding contributions to the natural and social sciences, arts and humanities. The RSC works to advise governments and organizations while recognizing academic excellence in Canada.

This year’s inductees represent McGill’s excellence across the disciplines, with research interests ranging from systemic discrimination and equality rights to developing better a understanding of the genetic bases for diseases.

“It is a wonderful honour for McGill to have ten of our scholars inducted into the Royal Society of Canada,” said Dr. Rosie Goldstein, Vice-Principal, Research and Innovation. “The RSC does invaluable work in promoting Canadian scholarship, and we are proud that our colleagues are making significant contributions to that mission.”

The Royal Society of Canada’s annual meeting will be held in Kingston, Ontario in November. Formal induction of this year’s laureates will occur at that time.

Congratulations to this year’s inductees!