New study sheds lights on pathways involved in rerouting the sense of touch to brain region originally used for vision in the congenitally blind.

The brain is plastic. Its billions of cells form trillions of interconnections whose strengths and purposes evolve as we grow, experience, learn and age. Brain regions do not map one-to-one with a specific function – most functions, such as recognizing a familiar face or voice, or trying to remember the name of an old school friend, are distributed in large brain networks.  Primary sensory brain areas are probably the most specialized, receiving direct input via the thalamus from sensing organs like our ears, taste buds, skin and eyes. But what happens to these primary sensory regions when they are deprived of their specific sensory inputs? Do they simply become useless or are they re-allocated to another sense? Think of a congenitally blind person (a person who is born blind) or a person who becomes blind later in life. Will their visual brain cells disappear, or will they adapt to take on another role, processing other types of sensory inputs?

Previous studies had shown that the visual cortex of congenitally blind individuals responds to various forms of non-visual stimuli such as touch, sounds, and even smell. However, a controversy exists as to which pathways are used to funnel non-visual information to the visual cortex in congenitally blind individuals. Most specialists have believed that the visual cortex activation represents a secondary, later downstream activation along brain networks, following the firing of early auditory or somatosensory brain regions. According to this line of thinking, tactile information, for example reading Braille, is first sent via the “tactile” or somatosensory thalamus to the primary somatosensory cortex, and from there moved along to the primary visual cortex. However, such an indirect pathway is intrinsically slow as it has to pass many synapses before reaching its final destination, casting doubts on its biological relevance. 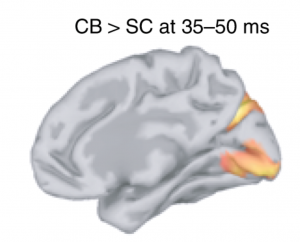 Have neuroscientists been overlooking the possibility of an alternative and faster pathway that bypasses early auditory and somatosensory cortex? Prof. Ron Kupers, a neuroscientist who specializes in the study of congenital blindness at the University of Copenhagen, believed so and conceived a study to test this hypothesis in people suffering from the rare condition of congenital blindness.

Dr. Kupers holds a joint appointment at the École d’Optométrie, Université de Montréal, where he has been collaborating for many years on this question with Prof. Maurice Ptito. Together, they reached out to Prof. Sylvain Baillet, a specialist in time-resolved neuroimaging techniques at The Neuro, McGill University.

Their challenge to Dr. Baillet and his group was to detect proof of early activation in the “visual cortex” of congenitally blind participants following light tactile stimulation of the skin. If they were able to demonstrate that the visual cortex of blind subjects responds to tactile stimulation of the skin equally fast as the primary somatosensory cortex, this would prove that the rerouting of non-visual information to the visual cortex takes place at the level of the thalamus, even before it reaches the cortex. The thalamus is a deep brain structure which is the first recipient of sensory inputs and the gateway through which information from the outside world is further relayed to early sensory cortices. Hence, under normal conditions, visual stimulation is sent to the visual thalamus (the lateral geniculate nucleus, or LGN) and from there to the primary visual cortex (V1), whereas tactile information is received by the somatosensory thalamus (the ventroposterior complex) and further relayed to the primary somatosensory cortex (S1). 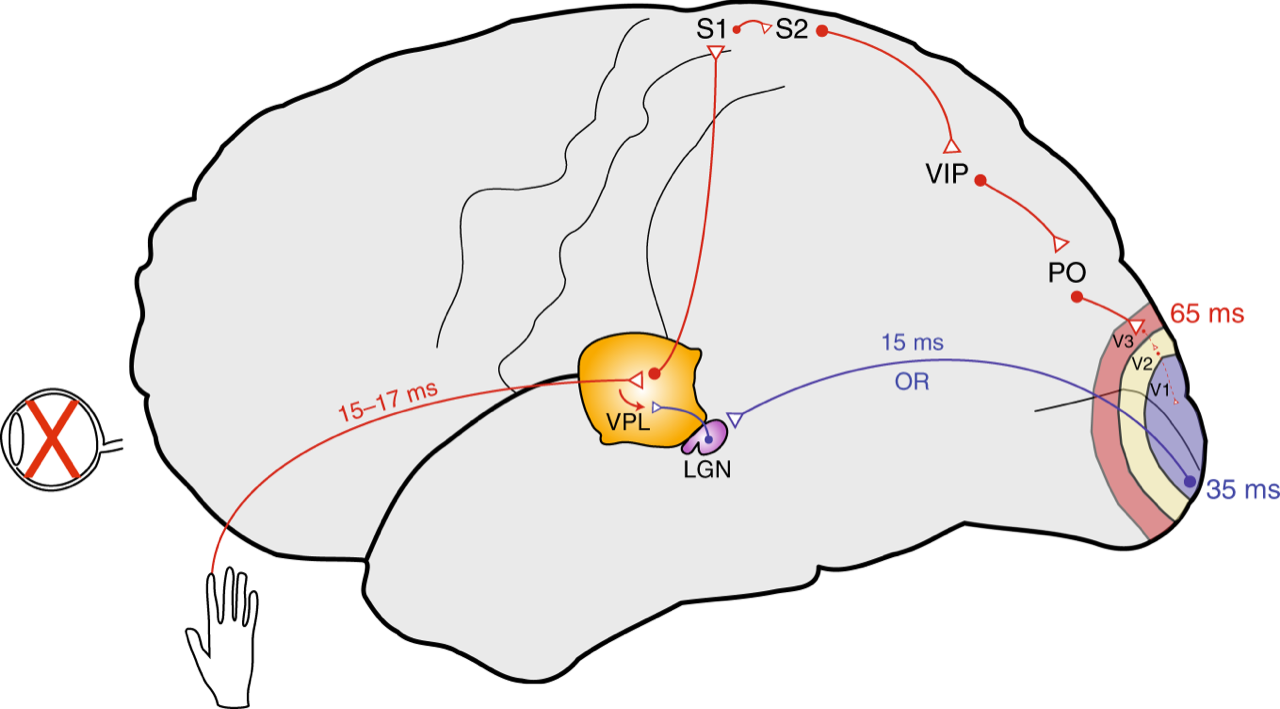 The outcome of their study was published November 11 in Nature Communications. Working in close collaboration, Franziska Müller (from the Copenhagen group) and Guiomar Niso (from the Montreal group), the co-lead authors of the article, together with Soheila Samiee (also from the Montreal group), used magnetoencephalography (MEG) imaging to track the millisecond changes in the brain of congenitally blind and sighted control subjects following tactile stimulation of the fingertips.

Using Brainstorm, a free, open-source app developed in Prof. Baillet’s lab with collaborators, the investigators were able to show that the primary visual cortex – which is normally devoted to vision – of blind participants responds nearly as fast to tactile stimulation of the fingertips as does the somatosensory cortex, the default processor of tactile information.

“The brain signals in these occipital regions, about 35 milliseconds after skin stimulation, were clearly much earlier and stronger than in sighted controls. Such a short response time is compatible with the hypothesis of a rerouting at the thalamic level: tactile information is redirected from the somatosensory to the visual thalamus (LGN), from whence the information is sent via the optic radiations to the primary visual cortex. In normally sighted individuals, this pathway is exclusively used to convey visual information,” explains Prof. Baillet, who is a Professor of Neurology & Neurosurgery, Biomedical Engineering and Computer Science at McGill and Director of the MEG Core Unit of The Neuro. This arrangement provides support to the observation of faster reaction times to tactile inputs in congenitally blind individuals. In daily life, blind individuals may benefit from such a functional rearrangement, for instance in the fast processing of rich tactile information such as in Braille reading.

Prof. Kupers adds that, “Evidence in support of a thalamic rerouting and ensuing ‘hijacking’ of the preserved optic radiations by tactile stimuli in congenital blindness had been hypothesized from animal models but had never been demonstrated in humans. Our study brings strong evidence that blindness at birth is accompanied by a rewiring of the brain circuitry at early thalamic levels so that regions genetically programmed for vision are repurposed for fast processing of information from other senses.”

They further confirmed this hypothesis by measuring the direction of communication between these brain regions, using the millisecond precision enabled by MEG.

“We also found stronger communication directed from deep brain relays like the thalamus towards the occipital cortex in blind participants than in sighted controls,” notes Prof. Baillet. According to Prof. Kupers, “This brings additional evidence that entire visual circuits are used for other types of sensory neuronal processing in the absence of visual inputs.”